Prime Minister Jacinda Ardern has strongly rejected the suggestion Kiwis are work-shy and don't want to take up jobs in sectors that have heavily relied on immigrant labour. 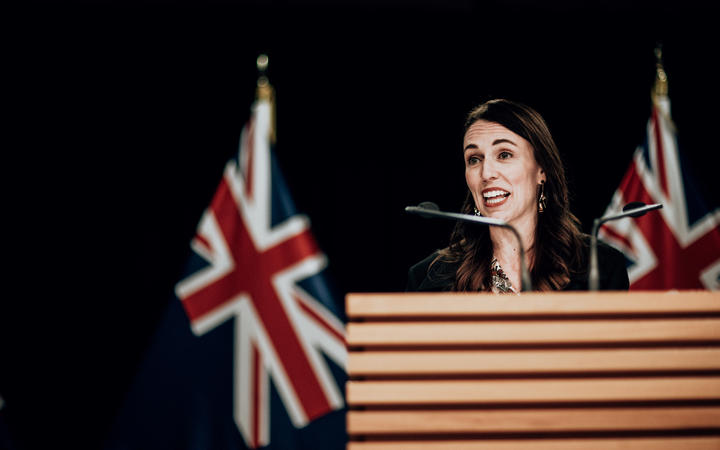 Prime Minister Jacinda Ardern says the government is signalling the need for a fundamental readjustment on how many sectors access labour. Photo: RNZ / Dom Thomas

Ardern made her comments after the government signalled a "reset" of New Zealand's immigration policies as it looked to how borders will operate in a post-Covid-19 environment.

Workers considered 'low-skilled' will find it much harder to work in New Zealand, while at the same time more will be done to attract those with higher skills.

Minister for Economic Development Stuart Nash told business leaders yesterday the country must move away from a reliance on low-skilled migrant labour and instead target attracting high-skilled workers and wealthy investors.

Nash told the audience that Covid-19 presented a once-in-a-life time opportunity to fix the country's over-reliance on migrant labour.

Some have been critical of the lack of detail following the announcement.

But Ardern told Morning Report the current situation was untenable and her government was simply signalling to businesses its long-term intentions and the need for structural adjustments.

She said the use of migrant labour had been a type of exploitation by some employers and also served to suppress wages in industry sectors, which was both unfair to migrants and New Zealander workers.

Those on temporary work visas make up 5 percent of the labour force - the highest share in the OECD and increasingly are lower skilled.

Reliance on a temporary workforce had doubled in the last 10 years to 200,000, Ardern said.

"That has an impact for migrant workers. It means that they may be coming to New Zealand, working in low-paid jobs, struggling to find decent housing and at the same time in the New Zealand economy we see it suppressing wages. Our view is, now is the time to look at those settings."

OECD reports had also found migrant labour did little to increase productivity in New Zealand, but the government was prepared to work with sectors heavily reliant on this arrangement to help transition to a more sustainable model, she added.

"That is our intention, to go and say 'look, for those areas where you are highly reliant, what are your skills, training and education plan, what is the work that you're doing to ensure that you're engaging with government..."

When these plans were put in place the outcomes included increased wages for domestic employees and a trained 'pipeline' of local workers readily available to employers. The government would help in training and planning, Ardern said.

However, the prime minister categorically rejected claims by some industry leaders, in areas like aged care and horticulture, that Kiwis didn't want to work in their sectors, even when wages had met minimum wage standards and above.

"I disagree with that totally. I'm always careful about this notion that New Zealanders just don't want to do the job," she said.

"When we see for instance what the kiwifruit fruit industry were able to do in terms of completely shifting the balance of their workforce from overseas-based to a predominantly domestic one through Covid. That's not to say it's not been without it's challenges, it has. But this is where we need to work with industry."

Past government economic strategies of crudely relying on the housing market and cheap migrant workers to drive the economy were unsustainable and had to be revised, Ardern said.

"We've long pointed to the fact a growth strategy that is built around your housing market and immigration settings is not a sustainable long-term strategy... I don't think that we should pretend that this is something that has been happening over decades and decades. We've seen very recent issues over the past 10 years."

She said migrants hoped for quality of life when they uprooted from their countries to take up employment in New Zealand and they shouldn't instead be subjected to subsistance-type living, lacking to access to basic infrastructure and adequate housing.

"They should have an expectation of decent wages and decent living standards and yet what we have seen is exploitation, in some cases, of that workforce ... this is not just about us, it is about them."

Employers had already made some adjustments through the Covid-19 period, but Ardern emphasised there would be some areas of immigration policy the government would not be departing from.

"Short-term work, business or visitor visas, working holiday schemes, non-partnership, family and humanitarian categories and the importance of RAC - those things we are not anticipating fundamentally changing. This is us honing in on temporary work visas and the skilled migrant categories settings."

However, Westpac's acting chief economist, Michael Gordon, said international evidence suggested use of migrant labour tended to have neutral affect on wages and had a 'pure growth factor" regarding the economy.

"If you slow population growth, you slow GDP growth, and it also slows the economy," he told Morning Report.

"There can be differences within sectors, so there are obvious areas where the migrants coming into New Zealand are adding more to the labour supply side and maybe they have a suppressing effect on wages there.

"But then there's the other side where they're tending to add more to demand and that's not the side that you hear about so much, when the migration slow disappears."

He said the country was now looking at about 30,000 migrants coming into the country annually, as opposed to the net flow of 50-60,000 seen in past years.

He anticipated the response of those operating in sectors like agriculture and tourism to new policy settings would be initially to increase wages to attract Kiwi workers, but long-term trends could see some operators leaving the sector.

Chief executive of Tourism Industry Aotearoa, Chris Roberts, told Morning Report perceptions about working in his industry were an ongoing issue and Covid-19 had made that worse, given the amount of jobs that had been affected.

"Two years ago we started the Go With Tourism programme to try to attract more New Zealanders to work in tourism and change perceptions about tourism, because that's the biggest challenge that the research showed us," he said.

He acknowledged the tourism and hospitality industry had 'low-wage entry points', but said there were higher paying positions too, which should appeal to young people, if they were made more aware of the opportunities.

But location and shift work also made the work less appealing to New Zealanders, he said.

"We need kayak operators in Fiordland, we need cooks at Mount Cook village. These are jobs that turn out to be more appealing to a visitor coming from overseas rather than a New Zealander looking at those more remote locations."

What Roberts didn't want to see was a blanket ban on using foreigner workers as a fall-back if businesses couldn't find a New Zealander to fill the role.