Freight rail will now be funded from the same pot as roads. 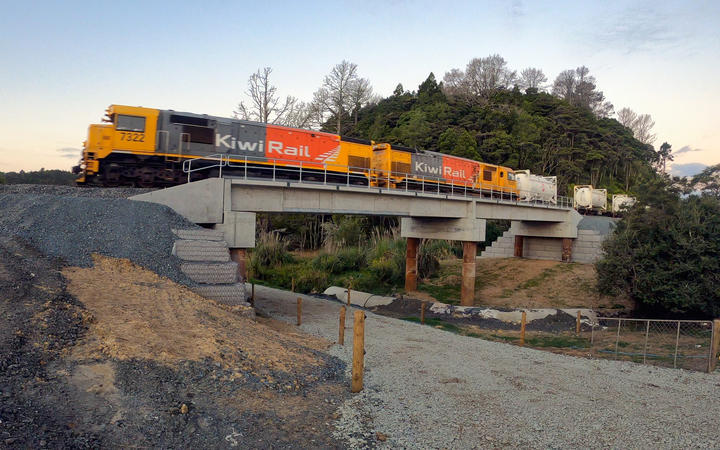 It is one of the announcements from the NZ Rail Plan - the government's 10-year plan for rail investment.

The plan says there has been significant under-investment in the national rail network for decades and large parts of the network are in managed decline.

KiwiRail will now also get funding from the National Land Transport Fund (NLTF) - meaning investment in rail infrastructure will be considered alongside spending on state highways, public transport and walking and cycling infrastructure.

The report says previously investment in rail has been made on a year-by-year basis. It says this is not sufficient when making investments in long-life infrastructure assets such as rail.

The plan does not lay out definitive list of projects to get funding in the next decade, or include any announcements about new money.

But state investments will be made to restore the network to a resilient and reliable state and lay the groundwork for growth.

It says by 2052, freight tonnage in New Zealand is expected to increase by almost 40 percent. 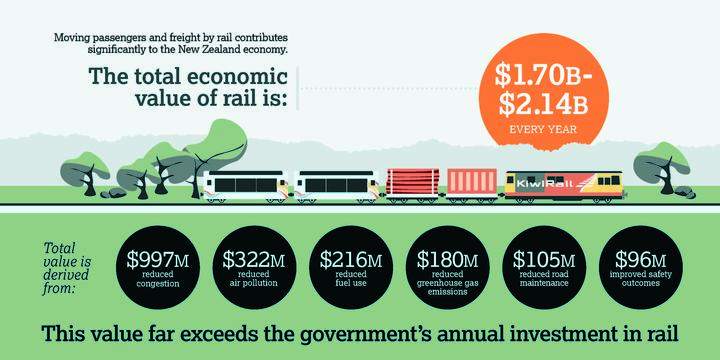 Some specific plans could include: re-opening Stratford to Okahukura line, completing the upgrade of rail in Northland, double-tracking Auckland to Hamilton and upgrading tracks to allow more weight across much of the country.

Additional electrification could be installed on heavily used routes. 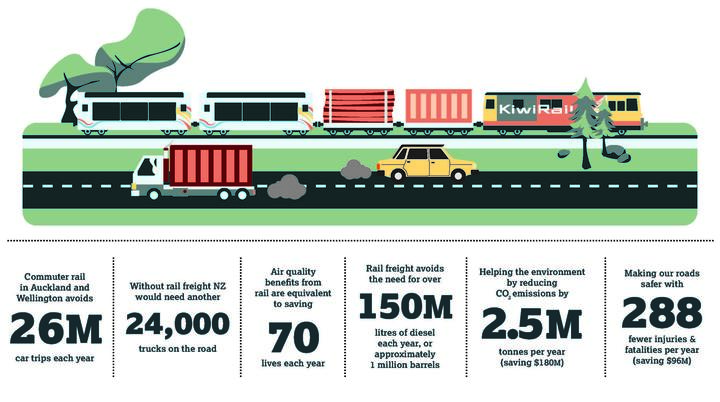 Minister of Transport Michael Wood said the Value of Rail report, also out today, shows rail was worth more than $2 billion to the economy annually.

That was calculated from lower congestion, air pollution, road maintenance, and greenhouse gases.

As a more fuel efficient transport option, rail prevented millions of tonnes of carbon dioxide from entering the atmosphere every year, Wood said.

Wood said in less than three years, the government had committed over $5b to rail. This includes a record level of funding in Budget 2020, with over $1.2b being invested in the rail system.

"We say we're going to have a national transport system and make rational investments to get the best outcomes to move people and move freight around the country.

"For too long, rail was shunted off to the side and was ignored and have to kind of plead for money on an annual basis. This means that rail is linked into the rest of the system and can have a much more strategic plan."

The first steps would be making sure the existing freight network was operating well, maintenance and upgrades were conducted, and Wellington and Auckland had effective commuter rail, rather than new track or routes, Wood said.

There was $2.1 billion worth of value created by the rail system and part of that was reducing congestion on roads, Wood said.

There was also reduced health impacts in terms of crashes and air quality, he said.

"So there's a benefit to road users from a functional rail system. But as a part of a series of reforms, we will also be introducing track user charges so that rail does start to pay into the national land transport fund."

What the charges would be was still being worked through, Wood said.