Prime Minister Jacinda Ardern says she hopes to be able to confirm a timeframe for a trans-Tasman bubble "very soon" but she cannot put a date on quarantine-free travel.

It is understood government plans for a trans-Tasman travel bubble are now in full swing, with expectations to have it in place by the end of April.

That would be on the condition there are no community outbreaks of Covid-19, or lockdowns, in the meantime.

The next step would be for the proposal to go to the full Cabinet, potentially on Monday.

"Our goal though is that once we open (to Australia) to be able to do it safely," Ardern said. "To do it in a way that people understand we may have short term closures and to enable us to have a bubble that essentially sticks."

She said airports had some "good, robust protocols in place, which is what we'd expect". Protocols needed to be in place to manage any possible outbreak in either country, she said.

Covid-19 Response Minister Chris Hipkins was reluctant to talk about any firm dates.

"I've been regularly discussing this with my cabinet colleagues, I envisage I will be doing so over the coming week or two," he said.

Hipkins said airports would need a matter of days to get ready, but airlines would need a bit more time to gear up their operations.

"The airport needs a bit less time than the airlines, one of the challenges for the airlines is that they have to scale back up again, get their planes back in the skies, get their crews back on board," he said.

He said government needs to make sure that contact tracing is geared up and that if it needs to cooperate with Australia it can, to share information quickly.

"Things like making sure that we're everyone coming in as downloading the Covid tracer app, and that we've got contact details for everyone who's come in," he said.

Ardern and Minister for Trade and Export Growth Damien O'Connor were speaking at a media conference for the launch event for Expo 2020, this afternoon. The expo was postponed due to the pandemic last year, and is set to be held in the United Arab Emirates from 1 October 2021 till 31 March 2022. 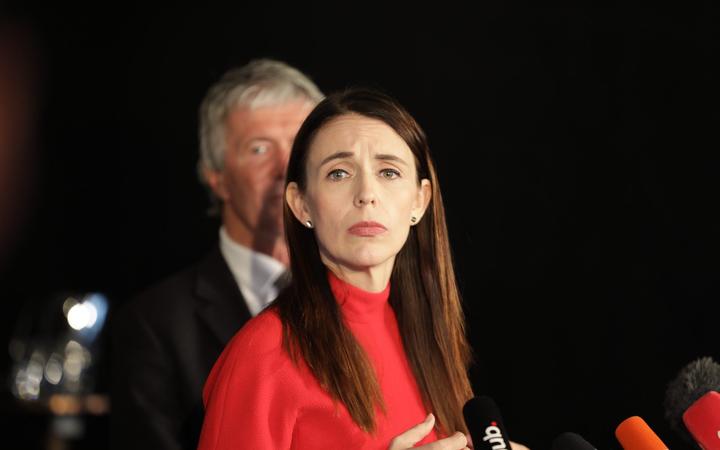 Ardern said that in a post-Covid-19 world, the expo would give New Zealand a chance to reconnect with the world.

"This event now is well positioned for countries around the world to launch back into international markets and that will certainly be the case for New Zealand, large participation from some of our major exporters," Ardern said.

She said it also meant New Zealand would be able to highlight what was unique about the country.

The planning that had gone in meant there would be online engagement as well as physical showcasing of what New Zealand has to offer, she said, and the timing of expo should put New Zealand in a better position to take part than it would have been in 2020.

People could be expected to have access to the vaccine by the time they needed to travel to the expo since it was in the second half of the year, she said.

She said there were groups that would need to represent New Zealand abroad - including exhibitors at the expo, and Olympic athletes - and Cabinet would be considering that as a whole.

"We just need to make sure that we treat everyone consistently if we do have a special process for those representing NZ abroad."

The government has also been under pressure from the opposition over entertainment acts granted border exemptions when some New Zealanders were facing delays getting home.

Despite an in-principle pledge of $5 million for Team New Zealand after its America's Cup win, the government was also hesitant this morning to commit to hosting the next Cup in New Zealand.

Ardern said the government needed to ensure it was being consistent and that New Zealand could derive some benefit from hosting.

If there's to be taxpayer investment, we do need to see a Cup, if we're investing in it raced here, Ardern says.

The government has also faced criticism - and offered some of its own - over Australia's deportation of New Zealand citizens in Australia convicted of crimes.

Australian Home Affairs Minister Peter Dutton told a journalist the deportations were "taking the trash out". National has said trans-Tasman relations have not been this bad since the Muldoon years.

"Generally of course we have an issue with the way that deportations, you know, across the board, regardless of age have occurred, particularly with those who have strong links to Australia, much more so than New Zealand," Ardern said.

A 15-year-old boy was understood to be on one of the most recent flights.

Foreign Minister Nanaia Mahuta has said the boy had not had his visa cancelled under Australia's 501 policy, and is in the care of Oranga Tamariki.

Mahuta was informed by Australia about the boy's case last Wednesday, but Ardern only found out after media inquiries.

Ardern said the advice she received indicated the boy was flown out alongside other deportees.

"In this particular case we have said it is very complex but it did have to be dealt with sensitively because of the young age of the individual involved."

She said New Zealand and the Oranga Tamariki team were doing the best they could under the circumstances.