The Green Party has unveiled an unsurprising portfolio reshuffle, ahead of the official opening of Parliament this week. 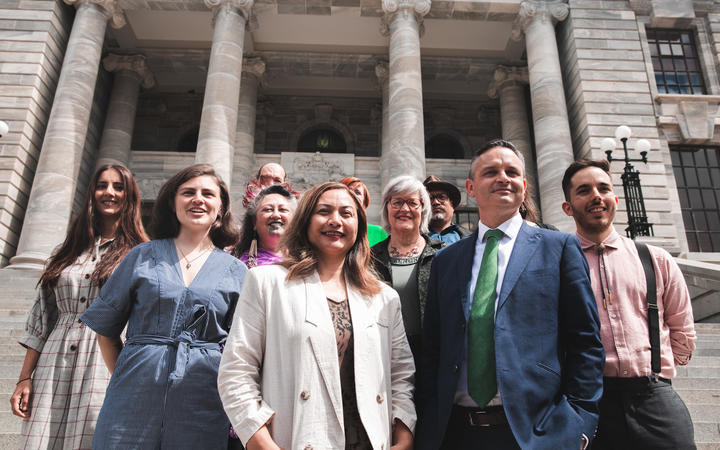 Co-leaders James Shaw and Marama Davidson will only hold portfolios related to their ministerial positions, which they picked up as part of the Green's co-operation agreement with Labour.

Other key portfolios, including finance, have been piled on the rest of their caucus.

Davidson holds prevention of family and sexual violence and housing, while Shaw has climate change and environment (biodiversity).

Davidson said with a larger caucus this term, she and Shaw were able to "focus on those ministerial portfolios".

"You'll see from my housing portfolio that while my associate minister delegation focuses on homelessness, my portfolio actually covers the whole issue and the big challenge of housing as a whole," she said.

"We also know that as Green Party co-leaders we'll be expected and will want to speak on a whole range of the portfolio issues across the whole team."

But Genter, who was the minister for women last term, loses the portfolio to Jan Logie.

She will also lead the party's economic and health response to Covid-19.

Logie will also be the Green Party's "musterer", or whip, and will be responsible for the child poverty and disabilities portfolios, too.

Eugenie Sage will continue her focus on the environment, as the party's spokesperson for conservation, environment, forestry, and oceans and fisheries.

Golriz Ghahraman retains the portfolios she has held previously, focusing on human rights, electoral reform and the justice system.

Three new Green MPs were elected last month and all pick up portfolios connected to their experiences outside of Parliament.

Dr Elizabeth Kerekere will be the party's spokesperson for rainbow communities, Māori development, health and arts, culture and heritage.

Ricardo Menendez March has been assigned the social development, employment and immigration portfolios.

Davidson said she expected great things from the three new MPs, who have 24 portfolios split between them.

"[They] bring their own incredible background, expertise, skill and experience in the sorts of areas their portfolios indicate."

Shaw said his caucus offered a breadth of talent and energy to Parliament this term.

"In 10 MPs you have a small business owner, a human rights lawyer, an academic, a climate negotiator, a transport planner, and so much more," Shaw said.

The skill and energy of the Green MPs would be of huge benefit to Aotearoa, he said.