It's been the highest ever early voter turnout, and the number of those who have cast their ballot already are expected to make up half of the overall turnout. Over one and a half million people have cast their vote already. 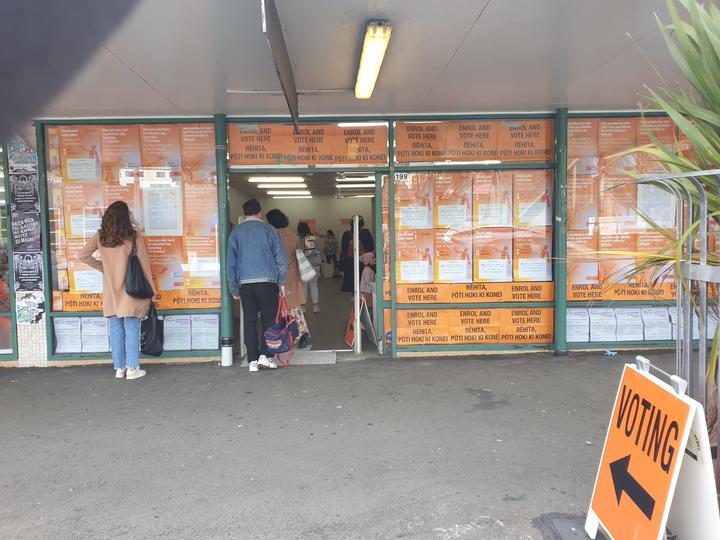 Voters queuing on the first day of voting, at a Riddiford Street polling station in Wellington. Photo: RNZ / Hamish Cardwell

Despite that, political campaigning hasn't slowed down, with many people undecided still to be won over.

RNZ spoke to some of those who took the plunge early to find out if they have any regrets.

One of those Phoebe only waited one day to vote. That was twelve days ago now, and she's still happy with her decisions.

"I have no regrets," she said. "I did watch some of the debates on the euthanasia, which definitely made me see both sides a bit clearer, but it didn't change my decision or anything at all."

Tyrone however does have some regrets, but not because of any of the campaigning the parties have done.

"My parents wanted me to vote National, but I was about to go and vote for the New Conservative Party.

"I read some of the policies, I liked it, but my mum, she's like, really into politics, so she just asked me to vote for it."

If he could vote again, would he do differently?

"Yeah but in this situation, I just did it to make my mum happy," he said.

Jim Roberts made up his own mind on how to vote but also took family into account for different reasons.

"In previous years, I would have voted Labour in this situation.

"It was clear to me they were going to win by a good margin, and I wanted to get the Greens over the line effectively.

"And I went and voted with my child as well, that might have influenced my vote a little bit. I'm not just voting for me, I'm voting for my kids as well.

18-year-old Naylah Macrae voted for the first time just a few days ago. For her the choice was always between National, and Act.

"I think I just voted for National out of fear that I just want them to have a strong party vote, because their polls are looking quite weak at the moment, it's making me nervous.

"I think in the next elections, I'd vote for ACT. I think that's why I voted for National for this election, because this is a different election, it's a Covid election."

On the other side of the political spectrum, Iza Thomson, made sure she was well informed before heading to a polling booth two days ago and voting for the Greens.

"Even though I knew what I wanted to vote for, I wanted to be educated in my decision and actually make sure I have grounds to stand on for why I voted for that, rather than picking left or right, and then being like, 'Yeah I'm left wing, I vote for left wing parties, that's me', and not really thinking about it."

While record numbers of people are voting early, a many people like Leianah Afu, are holding out for Saturday.

"I think I'm just waiting at this moment - I don't really know which side I'm leaning more to.

"I think both sides, for me personally, have a lot of negatives in that aspect, so I'm just waiting."

Alexander Stone, is also looking for guidance more from friends rather than politicians.

"[I'm] telling people I haven't made up my mind, [and] giving people the kind of opportunity to say why they've, in the case when they have cast an early vote, why they're so sure of their mind at this point.

For those still to make up their minds - the clock is ticking - with just two days left to vote.