A complaint against a National candidate's billboard has not been upheld by the Advertising Standards Authority. 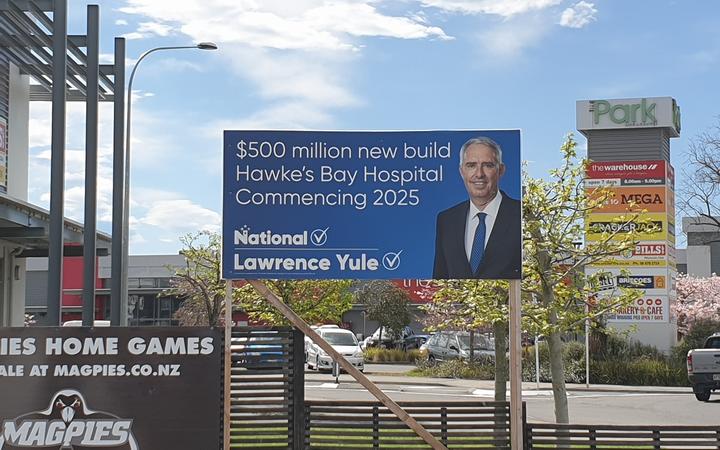 The authority received two complaints relating to billboards dotted around Hastings that feature a picture of Lawrence Yule alongside the words "$500 million new build of Hawke's Bay Hospital commencing 2025".

It also investigated a complaint about a full-page newspaper ad in which Yule said he had achieved a record $800m commitment to infrastructure projects in the region.

A member of the public told RNZ she had filed a complaint because the funding pledges were all announced by National leader Judith Collins during a recent visit to Hawke's Bay and would only be brought to fruition if National won the election.

"While the advertisement may be intended to announce election promises by National and Mr Yule there is nothing to suggest this, hence my complaint."

The Authority chair found, however, there were no grounds to proceed.

"The likely consumer takeout, given the context of the advertisement and the tick next to the candidate's name, would be the $800 million commitment relates to pledges from the National Party if it is elected to government," the chair wrote in their report.

"Voters will be familiar with the process of policy announcements from political parties during an election campaign and understand that such policies signal the intentions of the parties at the time they are made. In the context of advocacy advertising, the statement in the advertisement is not a breach of the Advertising Standards Code."

Its chief executive, Hilary Souter, told RNZ: "in the chair's view, during an election campaign, people will generally understand that all political parties come out and make pledges or promises if you like about their policies and what they intend to do if they get into government."

In a statement this afternoon, Yule said the authority confirmed his advertising was not in breach of the Advertising Standards Code and the complaints were dismissed.

Yule said he felt "vindicated" by the decision.

"I always thought there was nothing wrong with these political ads, we're simply advertising that fact and I'm comfortable with the adverts, I always was," he told RNZ.