Prime Minister Jacinda Ardern says the alert level system is designed to work when there are active cases at lower levels, despite some experts saying it could be too soon. 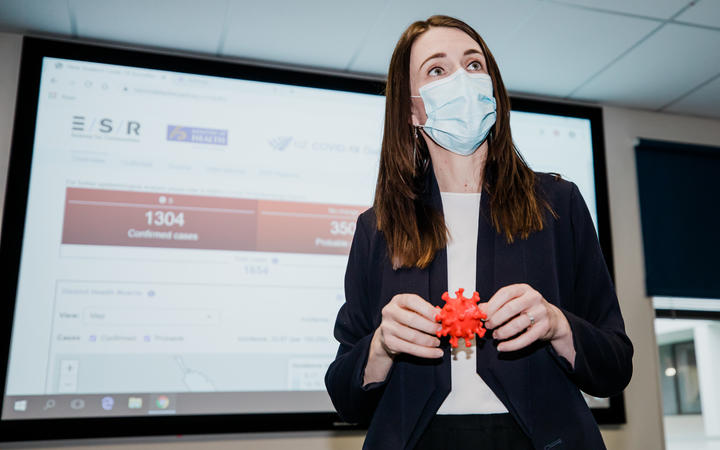 Prime Minister Jacinda Ardern wears a mask and holds a 3D model of the coronavirus during a visit to ESR in Porirua on 20 August 2020. Photo: RNZ / Dom Thomas

She told Morning Report Covid cannot only be managed at levels 3 and 4.

She says the move to level 2.5 while the Auckland cluster continues to grow is what the system is designed for.

Ardern said she received advice that restrictions of gatherings in Auckland to a limit of 10 was "very important".

"You'll see from the alert level framework that we set from the very beginning of this pandemic, it has anticipated being at level 2 whilst we're managing cases.

"Our system is designed to be able to do that. What we need to ensure is that we've got really good compliance with the other things we expect at level 2 in order to be able to make that work."

Ardern said everyone must play their part by social distancing and wearing masks.

"Masks are not a substitute for keeping our distance.

"If we all play our role, then we are able to continue to manage the cases that we do have in a 2.5 environment."

However, some experts warn it's too early to move from alert level 3 in Auckland.

The National Māori Pandemic Group says the Auckland cluster of Covid-19 cases isn't well enough contained for the region to move down a level.

Te Rōpū Whakakaupapa Urutā had urged the government to halt the relaxation of restrictions while community transmission of the virus is at current levels.

Though the majority of cases were linked to the main cluster, there were still one or two where there is no clear epidemiological pathway even though there is a genomic pathway, she said.

"We still don't think that the perimeter is really well described and contained even though it looks like it's one large cluster with some sub-clusters.

The group would have liked to see a "small amount of time at a higher level" while new cases were monitored over the next few days.

With Aucklanders now able to travel out of the region, New Zealand would be depending on them to take precautions against the spread of the virus, she said.

Hendy was concerned by the number of cases that had been picked up through community testing instead of via contact tracing.

He said easing the travel restrictions meant people could spread the infection to other parts of the country.

And epidemiologist Professor Michael Baker said the move to alert level 2 could see a growth in the case rate.

Ardern said restrictions aren't the only way to manage the virus and places like Taiwan are almost solely reliant on contact tracing.

"We've talked about the fact that there have been some scenarios where, had we had a singular case we could trace back to the source right from the beginning, we might not have had to move alert levels at all.

"Restrictions alone are not the only way we manage this virus. We have many tools, we just need to make sure we deploy them properly."

Ardern said regional boundaries are difficult for the many thousands of people who travel across the country for legitimate purposes and general precautions across New Zealand the trade-off for lower restrictions in Auckland.

She said we took graduated moves through alert levels last time around so level '2.5' shouldn't be too confusing.

"We didn't go immediately to mass gatherings of 100 people, we had a limit of 10 in the beginning. We did that last time and some people started loosely using the term 2.5 at that time."

Ardern said the new thing this time around is mask use and that we have to be willing to learn and adapt to new practices to combat the pandemic.

An Instagram message from the Ministry of Health this weekend incorrectly urged anyone in West or South Auckland to get tested.

Ardern said she's sorry for people who felt anxiety from the incorrect messaging on Instagram and the government moved quickly to correct it.

"It was frustrating but, as I've said, if we were going to urge 700,000 people to get a test, we wouldn't have shared that message solely through Instagram - you would've heard that from us."

Crengle said the wrong call on testing for West and South Auckland would have meant people without symptoms were tested, so wasn't the worst error to happen.

"Anyone can make a mistake, and we have to have some aroha for the person or people who made that mistake. It was cleared up relatively quickly and in some ways it was a message that would have people who were asymptomatic tested rather than actually discouraging people from testing," Crengle said.

"If you're going to make a mistake that wasn't a bad one to make.

"It was cleared up very quickly, the prime minister was very clear yesterday, and hopefully it will mean anyone putting messaging out will be very cautious and double and triple check what they're messaging."