Labour's Grant Robertson has called National's claims on Covid-19 "nonsense" while its leader Judith Collins denies the party is suggesting the government had held back information. 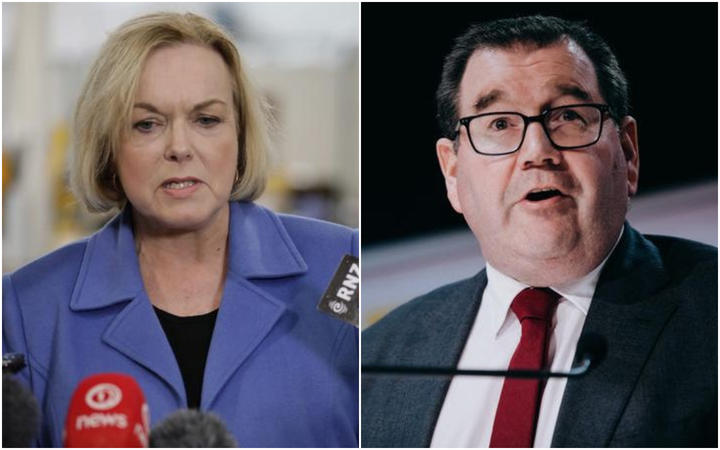 Robertson is also rejecting National's suggestion that Jacinda Ardern step back from announcements on Covid-19 alert levels so close to an election.

National's leader Judith Collins says it should be health officials, not the Labour leader, announcing changes to alert levels.

Collins is calling the election to be postponed to November, or next year, and has said there should be more transparency from the government.

Robertson said if Jacinda Ardern did not front up to answer questions at media conferences there would be the opposite reaction and she would be accused of hiding away.

"It comes back to the point that we are still the government, we have an important job to do in making sure we get on top of this outbreak."

"It's [Ardern's ] job to lead the country through this. Dr Bloomfield is there as the lead health official, she's doing her job as prime minister and I feel that's what New Zealanders expect of us."

Any suggestion that the government had known there was community transmission before this week's events were "ridiculous nonsense" he told Morning Report.

Yesterday Collins stated that her health spokesperson wasn't getting all the information he needed while deputy leader Gerry Brownlee seemed to imply that the government was hiding information.

Brownlee has questioned the timing of official messaging on masks and testing.

"What makes me really annoyed about this, it's not about us as politicians," Robertson said.

"Mr Brownlee and Judith Collins are effectively accusing Ashley Bloomfield of being involved in some kind of collusion or cover-up with the government. He's an independent public servant who actually can't fight back so it's complete nonsense and also incredibly irresponsible."

"We are all here committed to keeping New Zealanders safe and well - why on earth would we do that."

National Party leader Judith Collins told Morning Report that she was not suggesting that officials knew something more about the latest Covid-19 earlier and didn't tell the public.

"I have not accused Dr Bloomfield of anything, and as for Ms Ardern I'm simply pointing to the fact ... it contemplates the fact that successive governments have been very careful in the way they exercise their power [prior to] an election given the fact there is an election coming."

On Brownlee's comments yesterday, she said: "He was simply stating some of the information that's been provided to us."

She said Robertson's accusations were "outrageous", and her call for transparency was about National's health spokesperson, Dr Shane Reti, to be involved in Cabinet discussions on Covid-19 and for him to get the latest information as soon as possible.

"He has been asking for a briefing on the health situation since early yesterday morning, promised it by Minister Chris Hipkins before noon, we are still waiting for that.

"It is important in opposition to be able to ask questions without being browbeaten when we ask those questions and it's also important for us to come in behind - where we can - the government, but it's difficult to do it if we don't have that information."

Collins said it was Ardern's call whether or not to delay the election, but the Electoral Commission has indicated it was doable.

Robertson said the government would be making a decision on Friday afternoon on whether or not there are further alert level restrictions or whether they can be eased.

"At that point in terms of issues like the election date and so on we will be able to resolve those."

He said New Zealand was able to stamp out community transmission before because of an absolute commitment and trust in good science and good government, and "now is not the time to abandon either".

"To create confusion and suspicion quite frankly could result in reduced trust from our communities in the very institutions we rely on most to keep us all safe.

"This could lead to less willingness to pitch in to stamp out the virus. This puts us all at risk.

"I would urge New Zealanders to continue to do what we do best: work together as a community, and use our common sense", Shaw said.

If restrictions continue the government will look at what economic support package can be provided and decisions would be made on Friday, Robertson said.

The government might potentially tap into the $14bn it had put aside, he said.

Robertson said the wage subsidy had been a very successful way of "getting money out the door" but the government is working with officials on other options as well.

"Our focus will immediately be as it always has been on keeping people in work, making sure there is some confidence and some cash flow for businesses."

Robertson said there was no indication at the moment from the health minister that further resources required for testing.