New Zealand First and the Greens are back taking swings at each other - this time Winston Peters is saying James Shaw isn't a man of his word. 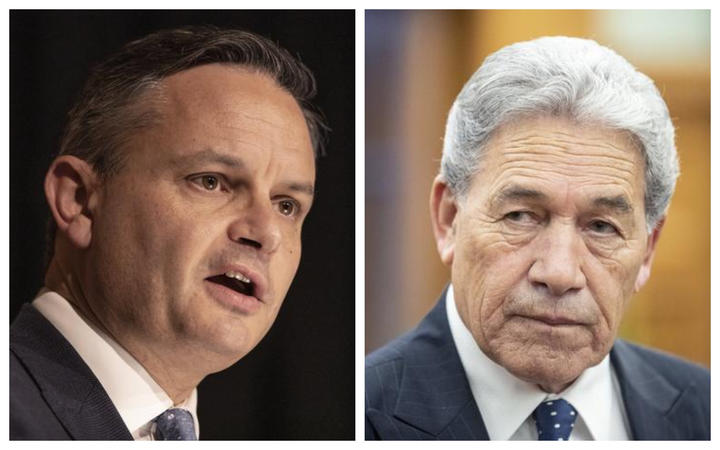 If it passes all stages, it would unravel the work done by the government to ensure MPs who quit their party are made to leave Parliament.

Just over two years ago Parliament passed the controversial waka-jumping legislation after the Green Party voted in favour of something they'd spent decades opposing.

The Electoral Integrity Amendment Bill was born out of the Labour-New Zealand First coalition deal.

It requires MPs who quit, or are expelled from a political party, to leave Parliament then and there.

The Greens hate the bill and think it is anti-democratic and draconian but co-leader James Shaw begrudgingly gave his party's support to it in 2018.

In a complete reversal, the Greens last night threw their support behind a bill to repeal it, enraging New Zealand First.

But it was Tracey Martin, not leader Winston Peters, who went to the chamber to fight National and the Greens on it.

"This is about a personal vendetta by [National MPs] Nick Smith and David Carter - that's what this is about.

"But New Zealand First will oppose it because democracies have to grow and live, and I say to the Green Party - there is a time and a place to stand up and keep one's word,'' Martin said.

And it was first-term Green MP Chloe Swarbrick left to respond to Martin's threat.

"The Green Party will honour our 20 year position on voting on this legislation tonight, in much the same way that we honoured the coalition agreement in voting for the legislation that originally put it into place,'' she said.

The Greens insist they have worked in good faith with Labour and New Zealand First.

But with just seven weeks until the election, Shaw is using a technicality to squirm out of a deal that left a bad taste.

"We never said and never made any commitment that if a repeal bill came before the House that we wouldn't also support that.''

New Zealand First has a track record of pulling support for Labour-Green policies at the eleventh hour.

There's been the capital gains tax, cameras on fishing boats, and more recently light rail from Auckland city to the airport.

"We did the work on light rail, the costings and the analysis did not back it up.''

He said the Greens' were breaking their end of the deal.

"They're signed up to the coalition agreement on this matter for three years and that term does not end until the 19th of September.''

Peters said the Greens can't be trusted and voters should remember that on election day.

"You cannot possibly be going forward to the years 2020-2023 contemplating a party that can't keep its word.''

But Shaw rejected that criticism.

"I think it's a bit rich for Winston to suggest that we're not trustworthy when in fact they're the ones who have been entirely slippery with the interpretation of our confidence and supply agreement.''

Shaw said his party is fed up with New Zealand First not sticking to the spirit of an agreement.

"So when it comes to the repeal of the party-hopping bill I would say that we have observed exactly the letter of our agreement.''

So is he just playing the same political games as Peters?

"Well I learn from the master,'' Shaw fired back.

With an election approaching minor party MPs are facing the grim reality that next week could be their last in the debating chamber if they don't get the 5 percent they need to return to Parliament.

Pressure is mounting after this week's Newshub Reid Research poll had New Zealand First out of Parliament and the Greens hanging on by a whisker.

It will be a nervous wait for both parties today, with a One News/Colmar Brunton poll out tonight.