A memorial service is being held in Wellington for Jeanette Fitzsimons, the former Green Party co-leader. 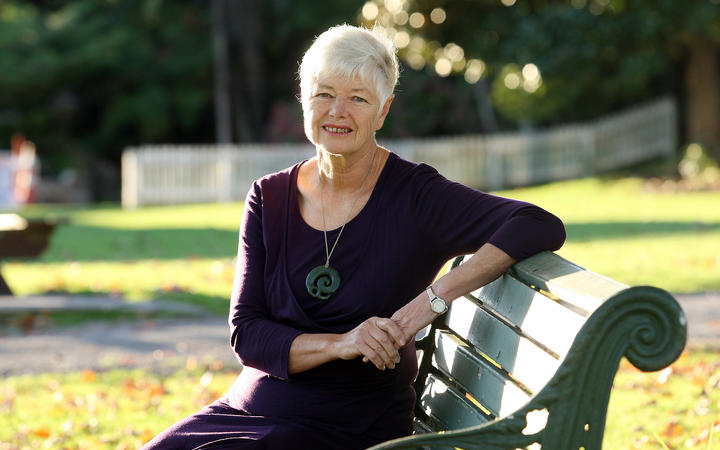 She died suddenly in March at the age of 75.

The Dean of the Cathedral paid tribute to Fitzsimons as an inspirational role model for everyone.

Former Green MP Catherine Delahunty acknowledged the presence of Fitzsimons' children and grandchildren at the service.

Few were able to attend the actual funeral when she died in March, Delahunty said.

"These moments are important, not only to say goodbye, but to acknowledge the kaupapa."

Fitzsimons' son Jeremy thanked all those who came to support them and pay tribute.

"I'm incredibly proud of my mum, and the work she did to make the world a better place.

Watch the service for Jeanette Fitzsimons:

"She packed so much into every hour of the day ... some of my earliest memories were of being taken to some meetings and falling asleep in some corner only to wake up in my own bed in the morning.

"She was hugely supportive of mine and Mark's musical developments," he said, adding that she too played the violin and piano. "She often said I played the violin like the drums - loud but not much attention to pitch."

He said music became a big part of her life again when she retired from politics.

"My daughter Isabella has fond memories of playing violin duets with her."

On when she participated in the international musical academy, he said: "She was doggedly determined to go to every rehearsal by bus in the middle of winter."

"Her life's work was to ensure her grandchildren had a future.

"Mum, you left so suddenly. You didn't even fulfil your life-long goal of getting arrested," he joked. "There was more you had left to give, and so much more I had to learn from you. I miss you."

Her husband Harry Parke spoke about her strong devotion to her family.

"She was very strong on whānau ... I was always deeply grateful for that."

"It's important to realise the person and not just the politics - as a person I think she had qualities that most politicians now should aspire to - she was a kind and gentle person, she would never put somebody down ... she would never make personal comments against anyone."

He said her time in power at the party was important period for the party establish its policies and make its mark, including getting legal aid for NGOs.

She devoted her energies instead into Coal Action Network Aotearoa and the climate declaration, Parke said.

"It become obvious to her ... that governments can't stop climate change.

"What people tend to say is somebody should do something about this, well actually that somebody is me, you, and eveyrone of us... it is our responsibilty to do it.

"Even with the Greens in government, climate change mitigation would probably be minimal."

One of the couple's highlights in recent times was the students striking against climate change inaction.

He said Fitzsimons had decided to be buried in nature-friendly way, within 10m of trees she planted at the cemetery in the past year or so.

"One of these days, I will hope to be somewhere near there," Parke said.

Her friend and colleague Christine Dann said she met Fitzsimons had been climbing her way through several environmental organisations when they met in 1978 and discovered common ground in wanting to protect the environment.

"I feel those connections - they were the best possible preparation for her role as an MP ... representing communities of interest," Dann said via a pre-recorded video.

Dann said people respected Fitzsimons for her intelligence, and listening to what others had to say and accommodating for their wishes where she could without letting go of her core values.

"When I remember Jeanette, I am in awe of the number of strong connections she made with other values-based activists over her life, of her intelligence and the way she applied, of her integrity and hard work, and if that was all that I remembered that would be enough.

"But over the 40-plus years we knew each other, I had these memories of her ... and when I miss her, that's what I miss as well," Dann said while tearing up.

"Your gumboots were mighty, and they take some filling but we who are left will keep trying to live with love and for love, for all that lives, just as you did."

Friend and fellow traveller Norm Smith said he had spoken with her in her last few days about what directions she would have taken with the Energy Efficiency and Conservation Authority, from which last year she withdrew her nomination to be chair of. "Your words are still ringing in my ears."

She said she was initially intimidated because of Fitzsimons' intelligence but found out she was actually approachable.

"I wanted to thank you for all your support with the Māori issues that we dealt with then ... most people won't know how incredibly supportive you were during some really tricky and difficult conversations we were having.

"You might remember the conversation we had with Ngāti Ruanui in that first year, and you trusted me and you trusted them to help us work through to a dignified and just outcome for all of us.

"It was amazing to watch that from you - clear thinking about the right path to achieve the just outcome.

"It was always about your people and your planet ... you gave us a new way of living and a new way to be in the world. You stood upright, and we miss you."

Former leader of the Australian Greens party Bob Brown said Fitzsimons was a philosopher and was way before her time.

"She was of course not just looking at the troubles we were headed for but the solutions ... she was looking in particular at the impact of climate change in a divided and unprepared world."

Brown said he valued her friendship, power of reasoning, and intellect.

"Jeanette is a friend who is gone but her power and intellect stays on."

Cindy Baxter from the Coal Action Network Aotearoa (CANA) said Fitzsimons had been involved with them for the past 10 years.

"She was very keen on the action bit of the CANA ... she told me one of the reasons she accepted her order of merit was so that she could make a bigger splash when she was arrested," Baxter said, referring to Fitzsimons' activism, including sailing for a week into the exclusion zone of the Anadarko drillship.

"But I feel that we have collectively failed her in that," Baxter quipped, adding that no-one would dare to arrest the former politician.

Baxter said she had intended to read out a list of things that Fitzsimons demanded on climate action, "but I realised it's not Jeanette's to-do list, it's all of ours".

After the first MMP election in 1996, Fitzsimons entered Parliament as a list MP for the Alliance but it wasn't long before strains appeared in the grouping.

She felt herself left out of its decision-making and the Green Party itself was increasingly unhappy with the Alliance's direction.

Fitzsimons won the Coromandel seat for the Greens in 1999, the country's first elected Green MP, and was disappointed when she lost it in the following election, although the party remained in Parliament due to its party vote.

She and her co-leader Rod Donald were strong influences in the change in public perception of the party as a group of sandal-wearing tree-huggers.

Fitzsimons suffered a stroke in hospital on 5 March where she had been taken that morning after falling while working on their farm, husband Harry Parke said.

In March, Prime Minister Jacinda Ardern said Fitzsimons had been a steward for the New Zealand environmental political movement. During her 14 years in parliament, Fitzsimons was an early voice for action on issues now considered mainstream, like climate change, clean energy and the deteriorating state of New Zealand's water, Ardern said.

Greens co-leader James Shaw said Fitzsimons had immense generosity and humility, and understood that you must work with those you disagree with to forge a consensus. Fitzsimons was never about personality politics and was driven by what was the right thing to do, he said.

Jeanette Fitzsimons made it her life’s work to build a better Aoteaora New Zealand. She was exceptional and the beacon by which so many of us navigated. At a memorial service this afternoon we say goodbye, but forever we will stand on her shoulders.