The government will invest $85 million in the Queenstown economy to combat the economic fallout from the Covid-19 pandemic. 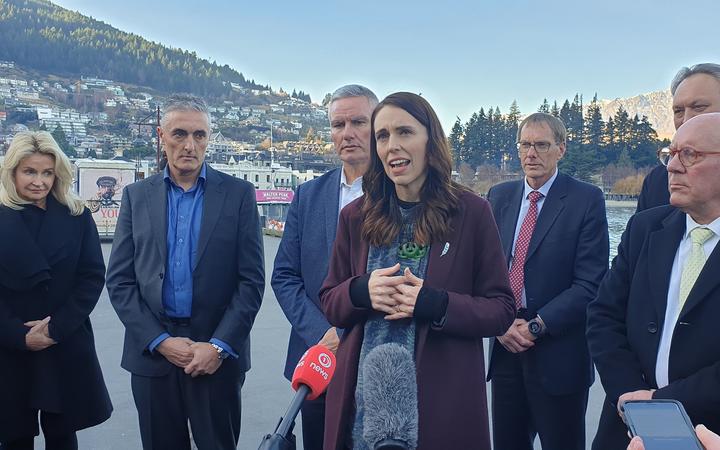 The prime minister announced the funding in Queenstown this afternoon.

"Coming off the skifield today, seeing the enthusiasm that is there amongst local residents and domestic tourists really does speak to the hope that is there but there is no denying that this region of course with our borders being closed will feel significant jobs from that."

"We also need to create other job opportunities and that's why it is such a pleasure ... to announce $85m worth of investment into Queenstown."

The $85m will include $35m alongside the funding being put up at a local level for this town centre redevelopment, and $50m that will go into phase 1 of a project focused on arterial routes around the town centre project, Ardern said.

Watch the announcement with the PM and the Tourism Minister here:

Ardern said there was "just no playbook" for responding to the pandemic.

"It is about moving as quickly as we can but also investing in long-term projects."

"When we do see a return of our international guests, I think our goal should be that they return to a place where we value our sustainability, but we're also valuing the people who work in the industry."

Queenstown mayor Jim Boult said the funding would be a "major shot in the arm" for the district.

"This will create jobs, you all know that we have massive unemployment and we've been saying for some time if you can't wield a knife in the kitchen, maybe you can swing a shovel on a construction site.

"We can get some of this work under way in three months, it also opens the door to further projects that we are considering and looking forward to."

"We know there's still tough times ahead but this govt is doing as much as we can to try and alleviate some of those pressures.

The government has also announced that $25 million has been earmarked to help tourism businesses working on conservation land - an announcement welcomed by tourist operators.

Davis and Conservation Minister Eugenie Sage have announced most tourism-related DOC concession fees will be waived from 1 March 2020 until 30 June next year.

The funding will come out of the $400m Tourism Recovery Package so DOC won't be left short-changed on funding for its conservation work.

Davis said tourism businesses have been doing it tough with the borders closed to international visitors.

"When we've gone through the applications, we want to get that money out as soon as possible to help businesses that are doing it tough, but also those strategic tourism assets, they're the backbone of the industry. We want them to still be in place when our borders do reopen so there's things for [tourists] to see and do."

"There are approximately 1000 tourism concessionaires who operate on public conservation land who won't have to worry about activity-based, management, or monitoring fees until mid-next year," she said.

Those fees to be waived include management, activity-based, monitoring, and admin concessions, but community service fees similar to council rates will remain in place to cover waste and water services.

Southern Discoveries chief executive Tim Hunter would like to see the back of 2020, saying the business has been completely pole-axed by Covid-19 and the Southland floods earlier this year.

The business is down to about 90 staff after the Fiordland floods and Covid-19 but will likely reach 50 within the next two months.

Today's announcement that the concessions which businesses pay to work on the conservation estate would be waived has been welcome news.

"In Milford Sound, we pay $4.50 per passenger to DOC. In a typical tourism year, that would relieve us of about a million dollars of costs. In the new environment which is very very much smaller, we might see a saving of about $150,000 a year, but it's a good decision, it's helpful decision and DOC's done the right thing," Hunter said.

But he said the government could not stop there as many businesses had to cover millions of dollars in operating costs a year.

Opening up the trans-Tasman bubble, extending the wage subsidy and increasing funds for strategic tourism assets would go a long way to helping the industry, Hunter said.

In a normal year, NZSki would pay about $1m in concession fees.

Chief executive Paul Anderson said cutting those costs was near the top of their wishlist.

"It's the first thing we went to the government with. We said 'Look, you're effectively our landlord and we're coming to you, we're going to be operating at a loss this year and every little bit we can do is going to help us'," Anderson said.

He is thrilled to hear the fees would be waived until mid next year, saying it's targeted relief that works for businesses of all sizes and means the skifields can hire more staff with confidence.

"That was actually our suggestion was to take it all the way through next summer because hopefully we get the Australians back during summer so it will give summer-based concessionaires the ability to just get back up on their feet and trade through a season and get their cash flows going again so I think it's a great decision."

The government is also rolling out the $1.3 billion nature-based jobs package to support thousands of people impacted by Covid-19.

The announcement comes as Davis and Ardern have been speaking to local businesses in Queenstown today.

However, the businesses have been questioning why the tourism minister has been absent for so long from the struggling resort town.

Thousands of people have sought welfare after the district's main earner - tourism - ground to a halt.