If foreign film crews are allowed an exemption to border rules, so too should America's Cup teams, the National Party says. 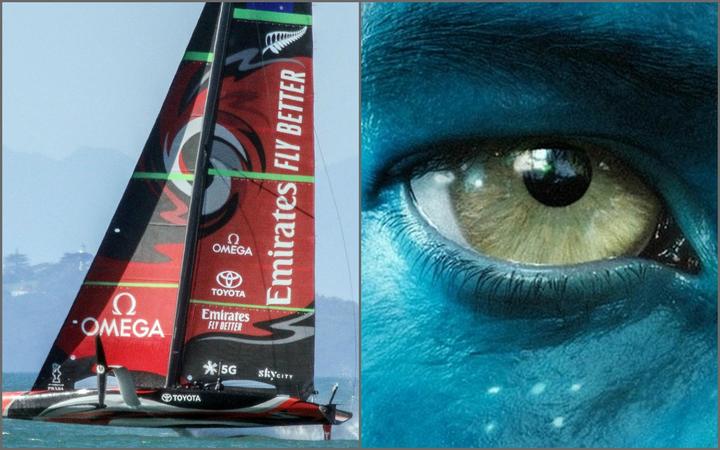 Team New Zealand's America's Cup yacht Te Aihe may continue to sail alone if rivals are not allowed into New Zealand. Meanwhile film crews for the Avatar movies appear to have been given special permission to enter the country. Photo: RNZ / Photosport / Supplied

The New Zealand border has been closed to non-New Zealand citizens and residents since March, with very limited exceptions such as health workers.

However, Avatar producer Jon Landau told RNZ last week the film crew was returning with him to Wellington and would go into a fortnight's quarantine this week.

New Zealand's America's Cup rivals said last week they had not been told whether their 100-strong teams could enter the country.

RNZ reported this month that New Zealand was expected to miss out on $150 million of income because Covid-19 and border restrictions had halved the number of superyachts due to follow the Cup next year.

The Marine Industry Association said those superyachts still considering whether to visit needed urgent advice on quarantine rules before they would commit to sailing to New Zealand.

National's immigration spokesperson Stuart Smith said if there were criteria of significant economic value to exempt some non-residents from border restrictions, they should be made publicly available.

"If there is a criteria we [should] all see what that is and then that it's applied evenly, it doesn't seem right if it's not applied evenly.

Fewer than 20 percent of applications by non-residents to enter New Zealand, including work visa holders and people wanting to see relatives, had been approved according to the latest INZ figures.

Immigration adviser Katy Armstrong said she had just been told that her clients, a family of five living in New Zealand since 2016, did not qualify for the exemption to travel.

They were "living in a shed in South Africa because they went on a two-week trip home to renew passports for the kids," she said.

"This is impacting not only on the families shut out but their employers who are at a loss to understand the reasoning. It's not just Avatar. It's the ordinary cases - one gets through; one doesn't, it's a total lottery."

The rules that allowed film crews in were not clear, she added.

"How is this essential work? If they want to make the rules up as they go along, let's have some transparency."

INZ said it was the government, not its staff, who made decisions on who would be approved under the category, and referred enquiries to the economic development minister, Phil Twyford.

INZ's published criteria for "other essential workers" said it was a limited group.

"The government will specifically identify and consider exceptions for other essential workers critical to delivering the response to Covid-19 and/or maintaining critical infrastructure.

"These essential workers are not the same as the holders of Essential Skills work visas, or people seeking to begin working in essential services."

Elsewhere, its advice on border restrictions states: "Crew (including Australian citizens not resident in New Zealand) travelling on superyachts and pleasure craft are not exempt from the closure of New Zealand's border, and current immigration instructions state they must be refused entry permission unless they meet one of the exceptions."

Immigration Minister Iain Lees-Galloway has been approached for comment.