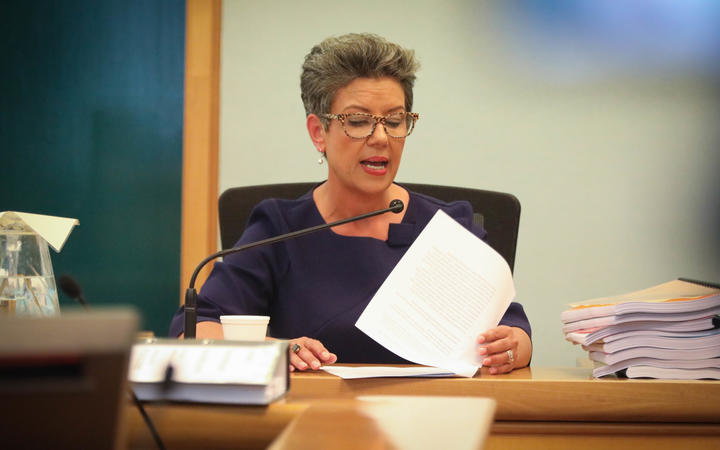 In a statement, Peters said the case had caused him "considerable stress" and every citizen is entitled to privacy.

The case was in relation to the leaking of details about his superannuation overpayment to the media ahead of the 2017 election.

Bennett said it was a waste of taxpayers' money and a "fishing expedition" by Peters for his own political purposes.

Peters was overpaid nearly $18,000 over seven years, after he did not fill out a section of his application form that asked whether he had a partner.

He repaid it, and launched legal action.

The case was heard last November in the High Court in Auckland.

In court, Peters argued officials should not have briefed ministers about the overpayment under the "no surprises" convention, which requires departments to inform ministers of matters which might become controversial or be subject of public debate.

In a judgment released yesterday, Justice Venning said Peters had a reasonable expectation that the details of his overpayment would be kept private and would not be disclosed to people who did not have a genuine need to know, or a proper interest in knowing about it.

"In particular, he had a reasonable expectation that the details of the payment irregularity would not be disclosed to the media," Justice Venning said.

"The deliberate disclosure of the details of the payment irregularity to the media would be regarded as highly offensive to an objective reasonable person."

Bennett agreed with the court and Peters that the details shouldn't have been made public.

"But he can't then go casting aspersions on other people because he doesn't like something that's happened.

"So I agree it was inappropriate, I don't think it should have happened, but it did.

"What he doesn't then have a right to do, I think, is go out there with false accusations and do harm to other people's reputations, which I think he has done to us,'' Bennett said.

Justice Venning said Peters' claim failed because he could not establish that any of the defendants were responsible for the leak.

Further, he said officials had a proper purpose for briefing ministers about it.

The fallout between Peters and National

Bennett said the court case was just one example of why the National Party doesn't trust Peters, which led to leader Simon Bridges ruling out working with New Zealand First at the next election.

"The fact that he had served the papers the day before the election and then sat in front of us pretending that that hadn't happened, during negotiations, and that he was doing that in good faith I think is just another example of him not really having trustworthiness.

Bennett said she's never really had a relationship with Peters - they've never sat on a select committee together and didn't have a relationship while she was a minister for nine years.

"I'm kind of surprised at the animosity to be quite honest. I've never harboured any feelings for him one way or the other quite frankly.''

Bennett said it was "unfortunate'' the judgment was released the same day the prime minister was announcing an extension to the nationwide lockdown.

"I don't think it's very often a politician goes to court and gets to be named completely innocent, and I think [Peters] should be held to account for the cost quite frankly that he's put taxpayers through.

"But there's more important things going on at the moment, and I completely acknowledge that, and the courts have a right to put that out whenever they want to,'' she said.

Peters said he welcomed Justice Venning confirming it was ''a deliberate and malicious breach of privacy done with the intent to damage my reputation and cause harm''.

"This was always going to be a difficult case because as the decision points out despite evidence of malicious behaviour we had to prove who did it,'' he said.

"While we are disappointed we could not prove who deliberately leaked that data, the ruling makes clear MSD contributed to the error.

"We hope that MSD reflect on their role in this matter. As the holder of extraordinary amounts of individuals data, it is paramount they take appropriate steps to safeguard New Zealanders' privacy,'' Peters said.

A spokesperson for the State Services Commissioner said Peter Hughes declined to comment.