Former National MP, and now independent, Jami-Lee Ross, has been named today as one of the four people facing Serious Fraud Office (SFO) charges in relation to two $100,000 donations made to the National Party. 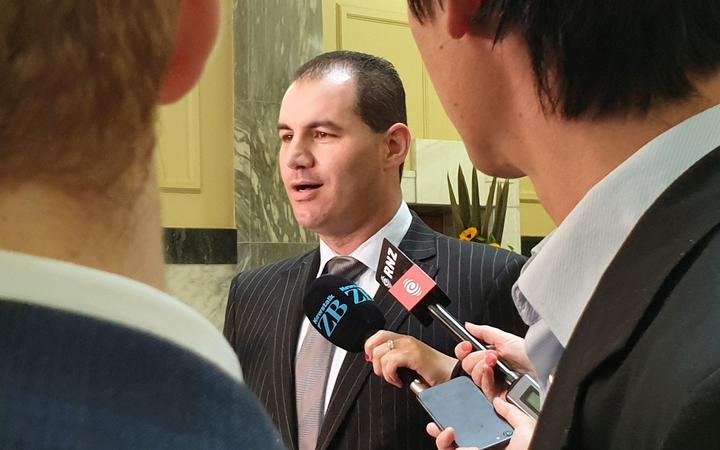 The three other defendants: Yikun Zhang, Shijia Zheng and Hengjia Zheng applied to have their interim name suppression lifted yesterday, and today in an application to the court, Ross said he too did not support continued name suppression.

Charges have been laid against the four over the two donations - one made in June 2017 and June 2018.

The charge sheets said they used a "fraudulent trick or device" to break up the donations into sums less than $15,000, which were then transferred into the bank accounts of several different people, before being paid into a National Party electorate account.

Hengjia Zheng, charged with deception over the 2018 donation, was also charged with providing misleading information to the SFO.

The charge sheet said money that was paid into his bank account "was intended to be used to pay $100,000 donation to the National Party through transmitters".

However, the SFO said that when approached, Zheng told them the money was a deposit to Anco Property Development "for building a house on the North Shore", and then created a backdated contract.

On 21 January the lawyers for Zhang, Zheng and Zheng asked for a hearing at "extremely short notice", called so quickly the judge noted counsel for various parties were "not even properly dressed for court".

They were asking for interim name suppression, after being informed by two media outlets they were considering naming one or all of the defendants publicly.

The SFO was represented at the hearing and said it would be unfair if the same was not extended to the fourth defendant Ross, even though he was not present, and the judge agreed name suppression would be in place for all four until the first court hearing next Tuesday.

However, yesterday the three defendants went back to the Auckland District Court, asking for name suppression to be lifted.

In a statement issued by a public relations firm working on their behalf, they confirmed their application was being considered by the judge, but gave no reason.

Today the application filed for Ross said he "has not and does not seek interim name suppression and is happy if such orders are discharged or lapse".

His application also said the other three had applied to have name suppression lifted "due to an apparent concern that Mr Ross, as a sitting Member of Parliament may make a statement to Parliament regarding the matter".

"No basis for such a concern has been provided, and there is none," it said.

"Parliament has been sitting for a week. During that time, Mr Ross has at no time indicated an intention to make a statement in Parliament or to the public regarding this matter in breach of the current orders, nor has he done so. He has complied fully with the interim orders, notwithstanding these were never sought by him."

It said "given his role as a sitting Member of Parliament, he would prefer to be able to be open and transparent regarding the fact that he has been charged, even though he was the whistle blower - the party that made the complaint to the police.

"He is eager to publicly refute the charges and to ensure that he is not now set up as the scapegoat by those knowingly involved in any donation deception, whether they are charged and before the court or not".

In a statement, Ross said he that he had wanted to speak openly about the charges but had been unable to because the three others charged had sought name suppression.

"As much as I would like to provide detail and evidence about what I now know, my lawyers have reiterated to me that these matters need to be tried in Court.

"But given what is being said by others, I want everyone to know and understand my position - I have never been involved in any deception to do with donations".

Ross said he blew the whistle because he felt the issue needed to be openly and honestly addressed.

"It is clear that I am now being painted as the scapegoat for the donation deception that the National Party, not me, benefited from.

"I am being painted as the scapegoat because I left the National Party after raising these concerns and because promises made to me by Mr Bridges in his campaign to be leader were not honoured by him," he said.

Ross said while it was convenient spin for him to be painted as the bad guy, he would not be "the National Party's fall guy".

"The donations that led me to blow the whistle were offered to Mr Bridges, not me. They were not for my own political or personal use. They improved Mr Bridges' position, not mine. I had nothing to gain at all.

"To the extent I played a part, that was as asked of me by the Party leader," he said.

Ross said the evidence he will present in court will make it clear who was behind the scheme.

The National Party has consistently rejected allegations made by Ross about National and its donations regime.

In a statement a National Party spokesperson said: "We stand by our previous statements on this matter. As it is before the courts we have no further comments to make".

The three businessmen who say they have been "dragged into Jami-Lee Ross' controversial fall out with the National Party" have issued a statement after their name suppression lifted.

The statement said the three will be defending the accusations made against them during "unprecedented political infighting".

It said they were "fully aware of the public interest in this case and the need to respect the integrity of the New Zealand electoral system".

The statement said they sought to have name suppression lifted, so the process could be open and transparent.