National finance spokesperson Paul Goldsmith has refused to give details on the party's planned tax cut policy announced in a speech by leader Simon Bridges yesterday. 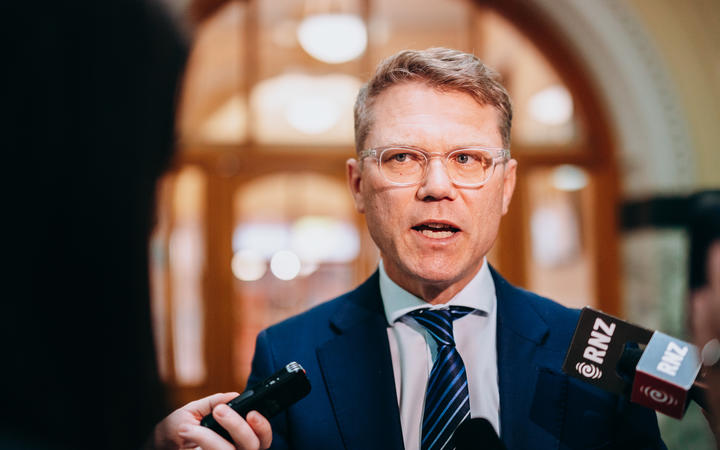 The National Party has flagged a tax cut package if elected - saying New Zealanders are struggling under the costs imposed by the coalition government - but there has been little detail offered except to say cuts would benefit "average wage earners".

In his speech yesterday, leader Simon Bridges said those on the average wage should not be paying 33 cents in the dollar - however only earnings above $70,000 are taxed at that rate.

"The average wage is around $64,000, it's been rising steadily over the past few years and somebody on that wage is not wealthy, they're struggling to get by with higher costs and we want to put more money in their pocket and make it easier for them to get around," he said.

"They're actually paying 30 cents in the dollar."

Challenged on that, he accepted that people earning that much would in fact be paying 17.5 cents on the dollar for any earnings between $14,000 and $48,000, but said that was not the point.

"The point is that we want to have that group, who are struggling, to pay less tax. And so what we're signalling is that as part of the mix if we're in government we'll be offering some tax relief as well as good quality spending."

He suggested that the tax band might be widened, raising the $48,000 upper limit.

"We've already signalled that we're going to adjust those tax rates for inflation to stop nibbling a little bit extra every year and we've signalled we want to go further. One of the ways to do that is to adjust those thresholds further so that more of an average wage earner's income is paid at the lower threshold, at the 17.5 [percent tax bracket]."

He agreed that cutting the top tax rate would not help those people, and said it was mentioned because the party wanted to be focused "on that middle income".

"That's about changing the thresholds that relate directly to those income earners."

The government's Finance Minister Grant Robertson challenged Bridges yesterday to say which services a National government would cut to achieve its tax cuts alongside the further investment that would require.

Asked the same question, Goldsmith said the party would be doing something about the government's fees-free policy.

"We haven't announced exactly how we're going to restructure it but we'll be certainly doing something in that area. Also, you'll think of KiwiBuild, $2 billion there, they've actually produced fewer houses than the prime minister has cancelled at Ihumātao."

He was challenged on whether, as a capital fund, KiwiBuild would not pay for itself.

"Yeah, well, a big organisation that's burning through cash in the meantime."

He also highlighted the Regional Growth Fund. He would not commit to cutting the fund, but said it would be "much more targeted and good-quality spending".

Goldsmith also signalled that the party would target housing.

"Absolutely the house costs are a big part of the story, so put more money in people's pockets and we also want to focus on the cost of living for New Zealanders and housing is a major cost. So yep, we're going to have a lot to say about housing over the next few months.

"The critical thing is to build more houses more cheaply, and if you can get new supply into the market at a lower price that will do great things for New Zealanders.

"You've got to be focused on renters as well and there's so many changes that this government has made that has made it more expensive for renters.

He would not commit to National removing tenancy protections the government had introduced however.

Bridges yesterday pointed to small business as one of the five major things National ways of achieving its economic objectives, along with tax relief, regulation reduction, infrastructure and "families".

Goldsmith confirmed a "small business relief package" would be part of the party's policy announcements in the coming months.

Asked if that meant cuts to corporate tax rates, Goldsmith said the party "haven't made any promises on that score at the moment".

He also refused to commit to a lower minimum wage than the $20 an hour Labour and New Zealand First had committed to, "but that is certainly something we're thinking about and also in relation to a whole host of areas where costs have been added".

"The two groups that are really struggling to cope are those that are exporting - because the rest of the world doesn't care about our cost structure, they just want the thing at the same price - and those who are working in the discretion areas like cafes and in ... hospitality," he said.

"Everybody wants higher wages and higher incomes but ultimately if they want to be sustainable they've got to be backed by productivity growth, and what we've seen in New Zealand in recent years is we haven't seen much productivity growth."

"That leads to less investment and ultimately that leads to fewer opportunities for New Zealanders to get ahead, so we're very focused on that cost structure," Goldsmith said.

Announcing last Wednesday that the official cash rate would be kept steady at 1 percent last Wednesday, Orr highlighted that economic growth was expected to improve after a slowdown last year, and high terms of trade, as well as fiscal and monetary stimulus driven by a low borrowing rate and government investment in infrastructure.

However, he also raised the prospect of the Covid-19 coronavirus as a continued risk for the economy.