The Prime Minister has sent a message to the family and friends of those overseas tourists caught up in the Whakaari / White Island eruption that New Zealand will hold their loved one close. 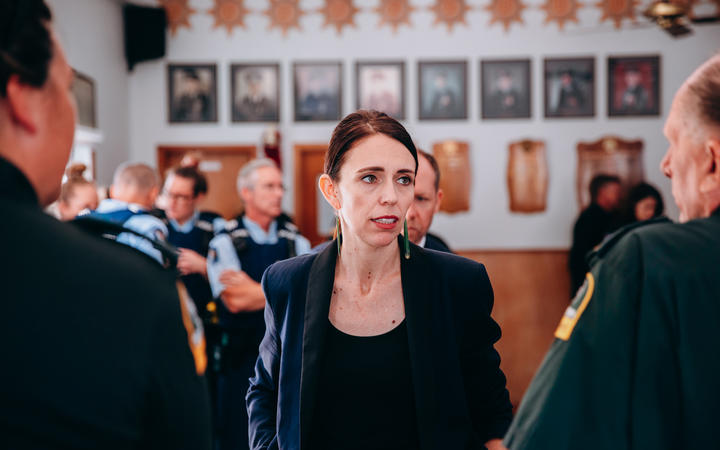 During a ministerial statement to Parliament Jacinda Ardern told MPs that among those injured or missing are people from Australia, the United States, the United Kingdom, China, Germany, Malaysia and New Zealand.

Six people have died as a result of yesterday's eruption and another eight are unaccounted for and dozens are injured.

Ms Ardern said she wanted to acknowledge the courage of the helicopter pilots who made the conscious decision to land on the island following the eruption to try to rescue people.

"I want to acknowledge their courage, in their immediate efforts to get people off the island those pilots made an incredibly brave decision under extremely dangerous circumstances. Having met them just this morning I suspect their own personal safety was the last thing on their minds and I'm sure all of this House would wish to pay tribute to them."

"Our hearts go out to the families of those who are injured, missing or deceased," Ms Ardern said.

"To those who have lost or are missing family and friends we share in your grief and sorrow and we are devastated."

She said New Zealand would do everything to support "international friends" saying Australia has been heavily impacted.

Ms Ardern said central and local government and iwi were engaged in providing the necessary support to everyone affected, which continued to be led by the Bay of Plenty Civil Defence Emergency Management Group which was focused on providing welfare support for victims, survivors and their families.

Police, supported by Fire and Emergency New Zealand, are focused on the recovery operation, as well as working to confirm the exact number and identity of those who are unaccounted for, she said.

Ms Ardern said she also wanted to acknowledge health professionals across the country to prioritise support to those injured.

Ms Ardern said in some cases people have been moved around the country to ensure they have the best expert care and they are in Middlemore, Waikato, Christchurch, Auckland, the Hutt and Tauranga.

"I met with first responders and health professionals this morning, they worked tirelessly in the most devastating circumstances, many of them had not yet rested or slept, the toll that the impact of this extraordinary tragedy has had on them was obvious."

Police and WorkSafe are expected to put out statements setting out that process later today, she said.

"These questions must be asked and they must be answered ... but our focus now is on discharging our duty of care to those affected and that is also the focus of police."

Police Minister Stuart Nash has defended the police decision not to attempt a Whakaari rescue last night and said he is confident authorities did everything they could.

Speaking in Parliament, Mr Nash told reporters the island is simply too unsafe.

"An extremely dangerous situation, a volatile situation, they had no idea what they were dealing with, and what they're doing is they're waiting for the right scientific and technical information before they can actually even think about going onto the island," he said.

Ms Ardern said New Zealand is a nation full of ordinary people who do extraordinary things and there is no limit to New Zealand's capacity to respond to those impacted by tragedy.

She said she has heard of St John's staff who boarded a coast guard vessel while it was still on the way to the mainland to give first aid support as soon as possible.

"I heard the story of those helicopter operators who when landing on White Island, as you can imagine, were greeted with devastating scenes, but did all they could to take off every survivor from that island and bring them immediately back to the mainland. I have no doubt that they saved lives at great risk to their own personal safety."

"I say to those who have lost and grieved, you are forever linked to our nation and we will hold you close," Ms Ardern said.

National Party deputy leader Paula Bennett thanked the government and first responders and expressed sympathy towards the victims and their families.

"Our earth has opened up and exploded and taken some lives with it ... our land has taken them and will always look after them," she said.