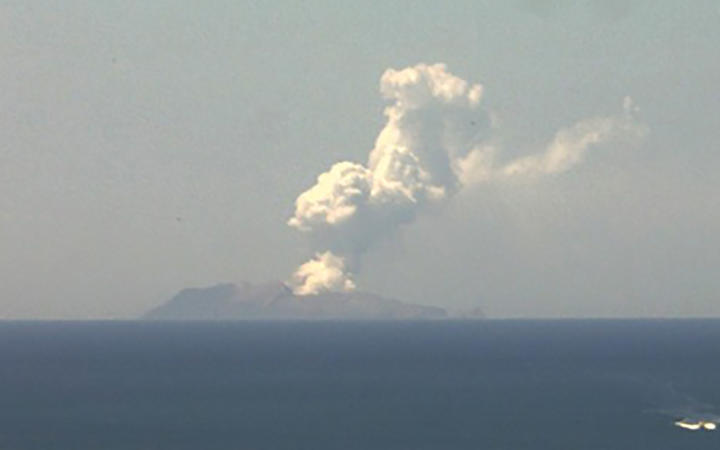 Prime Minister Jacinda Ardern said there were a number of tourists on or around the island at the time of the explosion including New Zealanders and people from overseas.

While initial reports were that about 100 people were in or around the vicinity of the island, Ardern said it can now be confirmed there were fewer than 50.

This morning authorities confirmed that 47 people went on to the island yesterday, five of whom are dead and eight missing, 31 are in hospital and three were discharged overnight.

Among those listed as missing or injured were New Zealanders part of a tour operation, as well as people from the US, UK, China, Malaysia and Australia.

In a press conference this morning Australian Prime Minister Scott Morrison said there are 24 Australians between the age of 17 and 72 who were at White Island at the time of the eruption.

He said 13 are hospitalised, 11 are unaccounted for and three are feared dead, but that has not been confirmed.

Ardern is in regular communication with Morrison and the Australian Federal Police will be sending liaison officers to assist NZ Police.

A pilot who surveyed the island for about 45 minutes reported back to police that there doesn't appear to be any survivors, and police said it was not believed that any survivors could have taken shelter.

The five deceased are from a range of nationalities, but police can't confirm if they died on the island or on their way back to safety.

He was part of a well-known family in the town and was a very experienced tour guide on the island, Bonne said.

The injured have been taken to various hospitals across the country, including Middlemore in Auckland, Wellington, Tauranga, Whakatāne, Waikato and Christchurch. No further updates on the status on the injured has been provided since last night when it was reported that the patients were in critical condition with burns.

But Waikato Police Superintendent Bruce Bird said no people have died since being in hospital.

Stay up to date with RNZ's liveblog coverage here.

A Ngāti Awa leader has confirmed a rāhui has been placed on the island after the fatal eruption.

Ngaropo said the rāhui covers the island and the waters around it.

"The rāhui is going to protect the island, the ocean, those who are there, their families and all those who are carrying out important work at the moment."

Meanwhile, people gathered at Te Mānuka Tūtahi marae this morning for karakia as the community came together to support those affected by the eruption.

"The unfortunate circumstances for us all here with the tragedy - people have acted in a very loving and caring way."

The blessing this morning also acknowledged the ancient history of Whakaari.

"She is a living breathing island," Ngaropo said. "She was around at a time when we as tangata whenua, as Māori, as New Zealanders weren't even here."

A Westpac helicopter, two private ones and a Volcanic Air helicopter landed on the island and were able to evacuate survivors.

Police said the focus now would be on working with experts to determine when they could return to the island and recover the missing people, but reiterated they would only do so when it was safe.

Police said as part of the recovery a NZDF ship was deploying drones and observational equipment close to the island this morning to further assess the environment.

The Police Disaster Identification (DVI) team was assembling in Whakatāne to await deployment.

Deputy Commissioner John Tims yesterday said police were taking expert advice on how to get a search and rescue team onto the island as soon as possible because it was too dangerous.

The Red Cross activated its Family Links site last night as a way for people to get in touch with family or friends who they're worried may have been caught up in the eruption.

Prime Minster Jacinda Ardern was in Whakātane and met some of those who rescued survivors from Whakaari/White Island, while National Party leader Simon Bridges was flying to Whakātane today.

This morning at a press conference, Ardern said Whakaari / White Island had two explosions in quick succession at 2.11pm yesterday.

GNS said the eruption was a short-lived event that generated an ash plume around about 3.66km above the vent.

GNS Science's Dr Ken Gledhill said: "On the scheme of things for volcanic eruptions, it's not large, but if you are close to that it is not good".

NZ Civil Defence has warned the immediate vicinity is dangerous.

People living in or near the area have been warned to beware of ashfall, closing all windows and doors and wear a dust mask or handkerchief.

Civil Defence emergency management director Sarah Stuart-Black said: "We do not expect this event to have any significant impacts for people on the North Island at this time. If the situation changes we will communicate this.

"GNS science have advised that the ashfall appears to be confined to the island and they do not expect more than a minor amount of ash to reach East Cape in the coming hours."

A no-fly zone has been established.