Former Auditor-General Martin Matthews is petitioning Parliament to reopen his case, claiming MPs "held a gun to his head" to force his resignation. 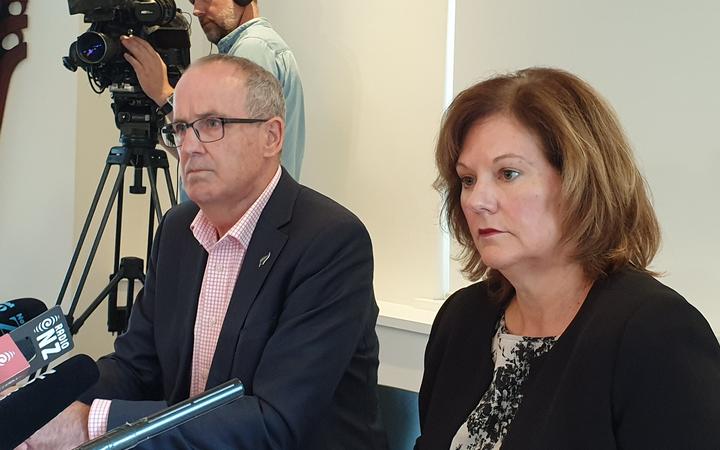 Mr Matthews resigned in 2017, hours before the release of a damning report into his handling of fraud committed by Joanne Harrison under his watch at the Ministry of Transport.

Mr Matthews headed the ministry while Harrison committed a $725,000 fraud for which she was eventually convicted and jailed.

The report by Sir Maarten Wevers, which was previously suppressed, found that Mr Matthews was "unsuitable" to be the Auditor-General and that he should have detected Harrison's fraud earlier.

But Mr Matthews, with support from Mary Scholtens QC, told reporters at a press conference this morning that Sir Maarten's report was faulty, riddled with errors and did not come anywhere close to establishing the threshold to remove Officers of Parliament.

Mr Matthews said MPs on the Officers of Parliament committee, including former Speaker David Carter and current Speaker Trevor Mallard, had acted out of "political convenience".

"They decided they couldn't be bothered to complete their inquiry, instead they said they were prepared to perpetuate a lie and to permanently destroy my standing and reputation if I did not resign.

"They were going to publicly assert that I was disabled and remove me from my role ... I was not and I am not disabled", he said.

Mr Matthews said he was denied natural justice to respond to inaccurate elements of Sir Maarten's report, and the actions of the committee would have a "chilling effect on the rest of the public sector" because it would encourage people to sweep things under the rug.

He described the toll the saga had taken on him and his family both emotionally and financially, and described himself as essentially "unemployable" because he was considered "too toxic or radioactive".

He said he began investigating her when he was tipped off that Harrison had committed fraud before and had changed her name.

"My investigations eventually uncovered a fraud which I immediately referred to the Serious Fraud Office. I never hesitated to do the right thing."

Mr Matthews said he stood by his handling of the investigation and defended himself for not detecting the fraud earlier.

"There's lots of things I look back on and wish I had done differently, but I know that what I did at the time I did with the knowledge and information I had at the time," he said.

Mary Scholtens said she was supporting Mr Matthews' petition because the way he was treated was "outrageous", "unconstitutional", and something that should be of "concern for all New Zealanders".

She said the Auditor-General's role had the capacity to annoy politicians of all stripes and their independence should be jealously preserved.

"It should not be possible for one of the few watchdogs in our system of government to be removed from office in response to unproven allegations, without a lawful basis or before a proper and fair process has been concluded.

"In this case Parliament was prepared to do all these things, while also threatening to destroy Martin's reputation and standing if he did not resign. This behaviour cannot stand as an acceptable precedent," she said.

Ms Scholtens said the petition being presented to Parliament called for an independent inquiry into what happened in the Officers of Parliament committee as well as redress for the substantial costs he has been subjected to.