The government's "world-first" agreement with farmers on emissions means some farmers are grateful for the breathing space, but for others it's just one less thing to worry about.

Ms Ardern said the plan would give farmers autonomy over their own businesses.

"This agreement will stick and it means instead of debating what we do, we get on with doing it," she said.

While some farmers are grateful for the breathing space, for others it's just one less thing to worry about in what they say is a long list of stresses.

Front of mind for Canterbury farmers are the government's Essential Freshwater proposals which, among other things, will put interim controls on land intensification, new controls relating to winter grazing and much more stringent rules for keeping stock clear of waterways.

The announcement has some farmers saying they'll be driven out of the industry because production will just become untenable.

So was Ms Ardern premature calling an end to tractors being driven up the stairs of Parliament?

Federated Farmers board member and Ashburton farmer Chris Allen says the government is safe - for now.

"We always hold the tractors off for a rainy day. You always have to exhaust all other avenues before you start driving tractors around.

"At the moment the government have said, particularly around fresh water, that they're listening,'' he said.

A common theme was the debate about whether a rural/urban divide existed.

Some in attendance had no issue with their urban neighbours, while others said they're being unfairly targeted and persecuted for being "dirty dairy" and ruining the environment while those in towns and cities wipe their hands of responsibility.

Ashburton farmer David Clark said it was a political beat-up.

"I think it's being played upon for political convenience currently and it doesn't recognise the journey that we're on and we've been on for a long time in agriculture to improve our footprints."

But Sarah Barr - who works and lives in the agriculture sector in Ashburton - said those living in town have no clue when it comes to farming practices.

"Not at all, I don't believe they understand the ins and outs of farming... there's a lot of emphasis on these dairy farmers being wealthy and it's great and they've got loads of money to throw at things but really it's pretty tight. There's a lot of debt in farming,'' she said.

At the Timaru meeting on Wednesday one concerned farmer argued the government is focusing on rural water quality over urban because Labour is worried about the city vote at next year's election.

Mr Muller told Canterbury farmers they have been dealing with improving water quality for years, but there's no recognition of that by urban New Zealand.

"There's not a conversation that says when you put on your dishwasher, actually, that the Tauranga wastewater treatment plant can't cope with that with 140,000 people, so it's actually starting to impact the surrounding environment.'' 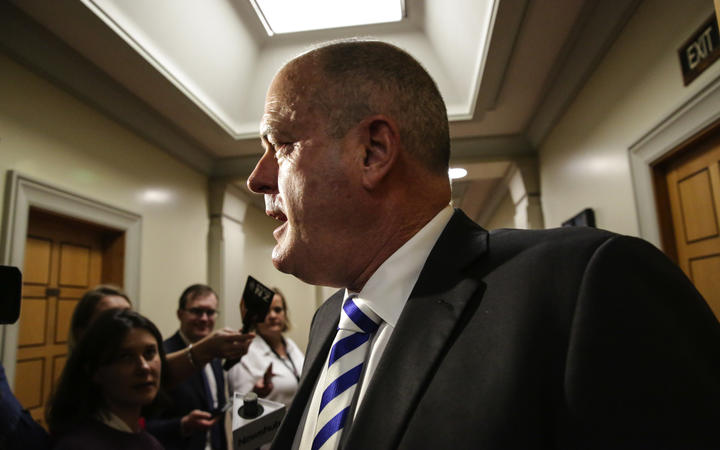 Todd Muller says city people don't realise farmers, such as those in Canterbury, have been focused on improving water quality for years. Photo: RNZ / Richard Tindiller

But Environment Minister David Parker did not accept that a rural/urban divide existed.

"In fact there was a survey out recently that showed urban attitudes to rural populations that was incredibly positive I thought. And we've been careful in this package of policies not to feed in the rural/urban divide by making sure the same expectations of swimmable rivers and improvement apply in urban areas as well as rural.''

In North Canterbury, third-generation Oxford farmer Tim Stokes said townies are tough on some farmers - but some farmers deserved it.

"To be fair, there's probably some farmers that need to pick up their game. Like any industry there's always someone who lets the team down,'' he said.

Mycoplasma Bovis remains a huge worry for some

There's plenty of battles for farmers, not least Mycoplasma Bovis.

Of the roughly 100,000 stock that have been culled, 20 percent have come from Ashburton alone.

Doug Archbold has spent his life on the farm in Canterbury whilst also dedicating thousands of hours to Rural Support - a trust set up to look out for farmers in times of despair.

M Bovis has been a huge worry, he said.

"I think there's always a fear that the phone goes and it's MPI - it's only natural.''

Mr Archbold said the fear of the unknown was also on farmers' minds.

"There are a lot of issues around farming I think, some of them may be about what might happen rather than what's happened.

"I think really farmers are saying yes we accept water quality needs to be improved...but this is not just a farming problem. We're sick of being vilified by the urban population with no mention of the problems in the urban sector, I think that's part of the problem.''

Farmers urged to fight back

"Imagine if you took a photo and just said this is us doing our bit for our stream and you keep doing it, it doesn't stop. It's not Federated Farmers' job to do this, we all have to,'' he said.

Mr Parker said he accepted there were concerns about proposed reforms but not all of it was justified.

"I think there's been no doubt there's been some pretty extreme comments from some quarters, not from all farm groups, but from some. And that's rarked things up and caused greater concern than perhaps what was warranted,'' he said.

"I accept that there are some pressures across the rural sector...it comes back to a number of core components like we have huge amounts of capital in terms of farm ownership and often high levels of debt. We've got an ageing population of farmers who have held onto properties...so we've got a bit of a generational gap there,'' he said.

But Mr Muller said there had to be changes on the water proposals and he expected there will be under New Zealand First's influence.

But he told the Ashburton audience New Zealand First will be gone at the next election because the country was waking up to the fact that leader Winston Peters signed off on these policies as deputy prime minister.

"He's a little bit like an arsonist who helps you put out the fire and wants credit for it.

"This actually isn't a joke and by the way, you're the deputy prime minister and you signed this stuff off in Cabinet,'' he said.

Mr Peters, who is in Japan at present, said his party's survival relied on regional New Zealand support.

"The truth is farmers have a lot to be grateful to New Zealand First for,'' he said.

With an election looming and all political parties kicking into campaign mode there's going to be plenty of jostling for both the rural and urban vote.

Submissions on proposed water reforms closed on Thursday and farmers are now waiting to see what changes, if any, are announced.