New Zealanders will almost certainly face a referendum next year on whether to legalise voluntary euthanasia after a make-or-break vote in Parliament cleared the way.

MPs voted 63 to 57 on Wednesday night for the End of Life Choice Bill - which would allow terminally-ill adults to request assisted dying - to go to a public vote at the next election.

The legislation still needs to pass its third and final reading in Parliament next month, but the referendum's green-light makes that highly likely by ensuring the continued support of NZ First's nine MPs.

The referendum was a bottom line for NZ First and its nine votes were considered near-essential for getting the proposed law over the line.

Speaking in Parliament, the bill's sponsor, ACT leader David Seymour, urged MPs to throw their support behind a public vote and asked them to consider it "one last chance" for the public to veto the legislation if they so chose.

"When you are faced with complexity and a wide range of different circumstances - people [who] find themselves with imponderable situations - the only solution that anybody can stand by on a principled basis is to give choice." 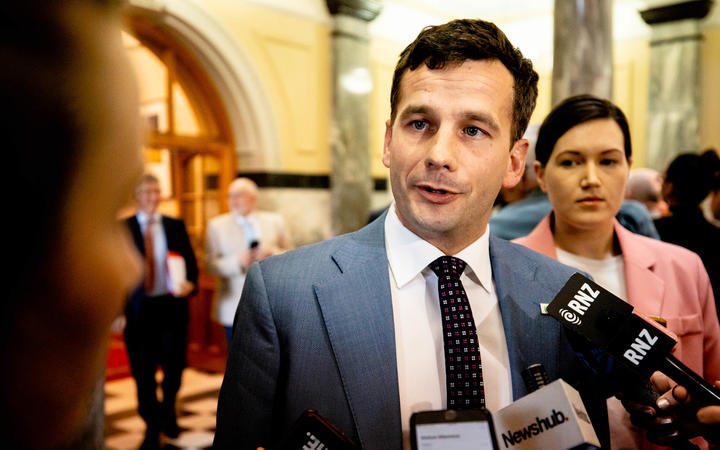 For the first time during the debate in Parliament, NZ First made its position crystal clear with its MP Mark Patterson saying the caucus would vote "en masse" against the bill without the guarantee of a referendum.

"For us, this is a matter of absolute principle. This is one of our founding principles ... that these sort of conscience votes go to the people of New Zealand."

The position prompted visible frustration from Labour MP Louisa Wall who supports voluntary euthanasia but opposes a public vote on the matter.

She said it was "inconceivable" that NZ First would threaten to stop the legislation in its tracks unless it was put to a referendum.

"That is appalling and that is abhorrent," she said. "You're putting us all in an untenable situation."

Ms Wall pointed to the reported harm caused by recent plebiscites on same-sex marriage in Australia and Ireland.

"People essentially have the intensity of their lives debated in the public ... and when I think about who may be demonised by this process, for me, it is the vulnerable," she said.

"My principles will not let me vote for the referendum - even if it means the bill fails."

Staunch opponents of the legislation also argued against putting the vote to the public, with National MP Alfred Ngaro calling the move "irresponsible".

"If in your hearts you know that this Bill is not safe enough, do not unleash this onto our country and into our nation where it will ... do harm to our communities."

As late as this afternoon, some MPs were still undecided: Labour's Willie Jackson told the House it was the "hardest vote" he'd ever had to make.

"Right now, I'm not quite sure how I'm voting. I thought I did, but I'm still debating it in my mind," he said before the dinner break.

"Referendums don't treat minorities well ... At the same time, I don't want to be the one vote that stops it all."

The End of Life Choice bill has had a long and often fractious passage through Parliament with both sides on occasion accusing the other of acting in bad faith.

The legislation has seen major changes since its introduction, with Mr Seymour significantly narrowing its scope and increasing safeguards in a bid to assuage critics' concerns.

The bill passed its first reading 76 votes in favour, 44 opposed, and its second reading 70 to 50.