New Zealand's spy bosses are warning they know of troubling foreign donations and "relationship-building" right across the political spectrum at both local and central government.

Rebecca Kitteridge told MPs the SIS had seen relationship-building and donation activity by state actors and their proxies that was concerning. Photo: RNZ / Diego Opatowski

The heads of the intelligence agencies also told MPs they support "more stringent" rules around disclosing donations but said a blanket ban on foreign money was not the answer.

Both Ms Kitteridge and Andrew Hampton - who heads the Government Communications Security Bureau (GCSB) - appeared before Parliament's Justice Select Committee on Tuesday afternoon as part of a regular review of recent elections.

The bosses made headlines when they last appeared before the committee in April, with Ms Kitteridge revealing the SIS had concerns about some political donations from "state actors".

"We've seen relationship-building and donation activity by state actors and their proxies that concern us," she told MPs.

"This activity spans the political spectrum and occurs at a central and local government level." 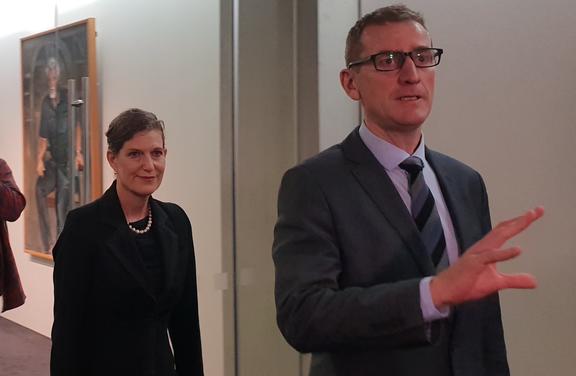 Ms Kitteridge refused to give any examples during the public briefing, describing the subject as "extremely sensitive".

The comments come amid fresh focus on a $150,000 donation to the National Party in 2017 from a company registered in New Zealand but owned by Chinese billionaire Lang Lin.

The transaction was legal and publicly declared, but Prime Minister Jacinda Ardern said it was "outside the spirit of the law" which is intended to limit overseas donations to no more than $1500.

Speaking to media before Tuesday's committee hearing, Ms Kitteridge declined to comment specifically on that example.

She later told MPs the SIS was concerned by any attempt to channel a donation in such a way to try obscure its foreign origin.

"One of the main reasons we become concerned about these activities is because as relationships of influence, or a sense of reciprocity, are established, they may be used as leverage to facilitate future interference or espionage activity."

But he says he is open to changing the system of political donations.

"I think there is a distinction to be drawn though between someone who's maybe not a New Zealand resident or citizen who is in New Zealand and has a connection here, and the issue of foreign powers and influence and it's the later of course that we really do want to get to."

It might not be a benefit to New Zealand though, he said.

He said it may be complex to change rules around foreign donations but he is keeping an open mind.

"I believe we want individuals and companies to donate, to see this as something that they should be doing in New Zealand."

He said there was no conflict with the trade minister being involved in arranging the donation.

Anne-Marie Brady, an expert on China's global influence, told Morning Report donations like these are given via a loophole in our legislation.

"We do need to pass targeted legislation because we can see that there has been very determined efforts to shape and influence our political system via these donations and our political parties seem to be addicted to them."

She said the loophole undermines the integrity of our political system.

The Green Party, various members of National, and independent MP Jami-Lee Ross have all called for a ban on foreign donations.

But Ms Kitteridge said a blanket ban "on its own" would not be effective.

"You can see how a foreign actor could easily use a New Zealand based proxy to work around such a ban," she told MPs.

"We know that foreign states are adept at understanding and working around regulatory regimes."

She said "more stringent disclosure requirements" would assist the SIS's investigative work by improving its ability to trace donations.