Long-serving National MP Nick Smith has been named in Parliament for the third time in his career - one of the most severe punishments a Speaker can hand out.

Dr Smith has been suspended for one day, which means he's barred from having his vote cast, from sitting on a select committee, from even entering the debating chamber.

Furthermore, for every day suspended, he will have about a day's pay deducted from his salary.

It's only the third time in his nearly 29 years in the House this has happened.

The situation came to a head after the mother of a young man killed by a drugged driver was yelling at the Police Minister Stuart Nash from the public gallery.

Dr Smith accused the Speaker Trevor Mallard of being "soft on drugs, like the government''. 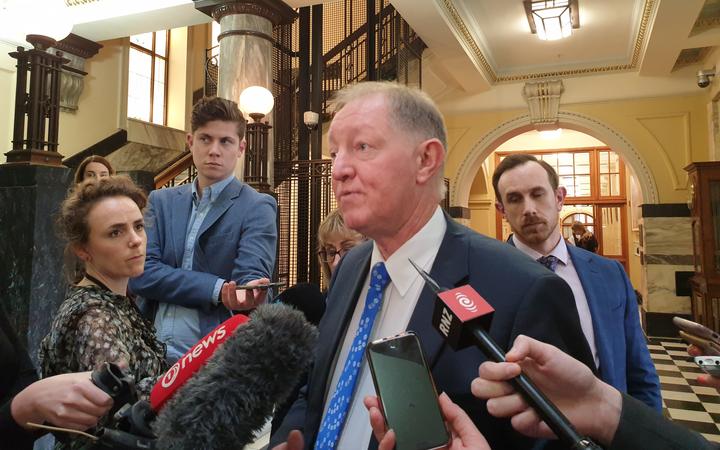 National MP Nick Smith after he was named by the speaker and suspended from Parliament for a day. Photo: RNZ / Yvette McCulloch

Mr Mallard said to the House: "The question now is that Nick Smith be suspended from the service of the house. Those that are of that opinion will say aye ... to the contrary, no ... the ayes have it."

Mr Smith told Checkpoint he did not think Mr Mallard was a neutral referee.

"He's not, he should never have objected to the introduction to the bill," he said.

"He should have maintained the Parliamentary practice that when an MP such as myself seeks leave for a bill to be introduced, to put it to the House and for the house to decide.

"When the speaker starts engaging in a debate about the issues and not being the referee, he leaves himself open to the very criticism that undermines respect for his office."

However, New Zealand First leader Winston Peters said the behaviour of Dr Smith in Parliament this afternoon was a disgrace.

"Well, you know it doesn't really behoove Parliament for people to behave that way and I thought it was a disgraceful misuse fo the theatre of Parliament to bring in somebody's misery and loss of life in their family for political purposes like that."