The Housing Minister Phil Twyford won't guarantee the government will stick to its 10-year target of 100,000 Kiwibuild homes.

Phil Twyford is facing ongoing pressure about the number of houses being built under the government's flagship housing programme, and the process under which developers are given the Crown underwrite.

A paper outlining a "recalibration" of the programme will go to Cabinet in an effort to improve KiwiBuild, but not until after this year's Budget.

Mr Twyford was this year forced to drop other annual targets, but at the time said the plan was still to build the 100,000 homes within 10 years. 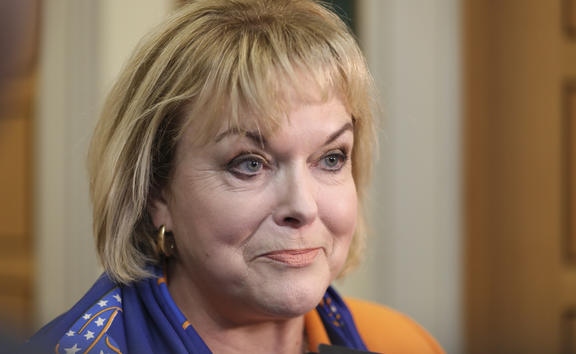 In Parliament, National's Judith Collins asked whether he would drop the 100,000 target.

Mr Twyford said the government would not "back away from building large numbers of affordable homes for Kiwis", but did not directly answer the question.

When he left the House, reporters asked him the same question.

"We're considering all aspects of the programme, not just KiwiBuild but the wider housing programme and I won't be speculating about what's in and what's out. I'm not going to be speculating today about the results of the reset," he said.

"The target hasn't gone, we're working through the reset," he said, but refused to recommit to the target "because we haven't announced the results of the reset".

That was despite the government - Mr Twyford and Prime Minister Jacinda Ardern both - committing to the hard 10-year target when originally announcing the "reset".

He said they were working through the problems and would make an announcement in June.

National Party leader Simon Bridges said it was a broken promise from the coalition government.

"The prime minister told the nation that KiwiBuild would deliver 100,000 homes in a decade, but this was a pipe dream from the start and it hasn't taken her [Ms Ardern's] government long to back away from it", he said.

The government had only built 80 houses halfway through its first term, compared with an initial policy of 1000 in its first year, he said.

"The year of non-delivery is getting worse by the day," Mr Bridges said.