Property developers have begun delivering their wish-lists to Housing Minister Phil Twyford on ways to improve the troubled KiwiBuild scheme.

The government yesterday scrapped its short-term KiwiBuild targets after earlier admitting it was not going to meet them.

Mr Twyford said he would now look at ways to make the scheme work better for first home buyers and developers.

Auckland developer Shane Brealey - who runs NZ Living - said there were three key areas where the government could improve the policy. First, the contract process needed to be simplified and standardized, he said.

"It can take a lot of time and it can set cost and timeframe barriers for us."

Mr Brealey, who has had one KiwiBuild project so far, said consenting also needed to be sped up.

"There are more months in total required to get resource consents and building consents for relatively straightforward projects than the number of months it takes to build those projects."

Ultimately that was councils' responsibility, so either they needed to pick up their act, or the government needed to run an alternative solution, he said. 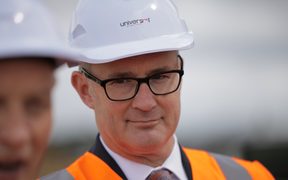 "We've had buyers that have come to us and said, 'oh, it's just too difficult, we'd rather go down the road'."

Mr Brealey said he hoped to continue partnering with KiwiBuild but had to weigh up whether it made more sense to instead build affordable homes outside of the scheme.

"I will need to look at each project one at a time and consider the alternative, which is potentially - I hesitate to say it - but do KiwiBuild without KiwiBuild."

Property developer Ian Cassels said the policy's recent setback was just a "hiccup" and not a sign of failure.

Mr Cassels, the founder and director of The Wellington Company, has already signed two deals with KiwiBuild

"It is unavoidable that you will get hiccups and teething problems.

"This hiccup is practically insignificant."

He said turning around an entire building culture was hard work but essential if young people were ever to afford to buy a home.

"Of course, it's easy to poke fun at [the policy]," he said. "But wouldn't it better to accept that we're going to have to do it - and make positive suggestions on how we can do it better?"