The Speaker has launched an external review of bullying and harassment of staff at Parliament dating back to October 2014. 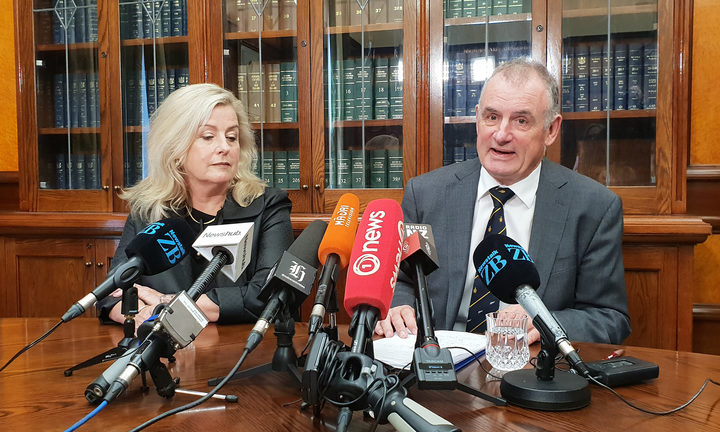 Reviewer Debbie Francis and Speaker Trevor Mallard at the announcement of the launch of the review. Photo: RNZ / Jo Moir

The National Party is already doing its own internal review of its culture, following allegations that former National MP Jami-Lee Ross acted inappropriately with staff and another MP.

Mr Mallard said the review will be carried out by an independent external reviewer, Debbie Francis, who has done similar work with organisations such as the Defence Force.

He said bullying and harassment were unacceptable in any workplace and the review was designed to work out what could be done to improve the parliamentary workplace.

As part of the review there will be a mix of interviews with party chairpersons, political party leaders, chiefs of staff, chief whips, MPs (both targeted and randomly selected) and focus groups with a mix of people from the same political parties.

Staff will be able to take part through a secure online survey, one-on-one interviews with Ms Francis by phone or face-to-face, focus groups and in writing.

All information will be kept confidential and no one will be identified, or identifiable, in the final report resulting from the review, she said.

"It is vital that staff feel they can contribute their experiences to this review safely. That is why we are ensuring that all data is securely held, and will be destroyed at the review's conclusion," Ms Francis said.

The review will examine any trends or patterns that emerge and make recommendations on how these could be addressed for the future. The findings will be published at its conclusion.

There will be additional supports put in place for those participating in the review during this process, including a phone line to connect with trained counsellors.

Mr Mallard said the review wouldn't be a blame exercise and wouldn't reopen past cases so as to avoid revictimisation.

The review will support people wanting to make police complaints but complaints won't come from the review itself, Mr Mallard said.

The Green Party have also welcomed the review.

"Everyone should feel safe when they come to work," Green Party workplace relations and safety spokesperson Jan Logie said.

"The Green Party have previously said that, like other workplaces in New Zealand, the Parliament has a problem with workplace culture and bullying," she said.

"It is clear we need to assess culture and practice in this place and find out what we need to do to make Parliament a safe and healthy workplace.

"We encourage people to feed into the independent review that has been initiated."

"We also commend the collaboration of the three agencies that PSA members work in - the Parliamentary Service, Ministerial & Secretariat Services / DIA and the Office of the Clerk - to ensure the review recognises Parliament as a 'single workplace'," Mr Barclay said.

"It is important that consideration of how Parliament as a workplace meets that basic standard is within the scope of the review, and that scrutiny will be given to the degree to which behaviours of bullying and harassment - including sexual harassment - have occurred and been handled at Parliament.

"We note that while it isn't the objective of the review to 'reopen' complaints dating back to October 2014, the fact that the effectiveness of how complaints were handled is under review is likely to put members of staff, including contractors, under a large amount of associated stress and strain."

A similar review in Britain, the culture revealed as part of an investigation into law firm Russell McVeagh and a series of issues arising around Parliament had prompted Mr Mallard to get an external review underway.