Armed with signs, songs and faith, about 1000 Christians gathered at Parliament today to demand Jesus' name is put back back into the Parliamentary prayer. 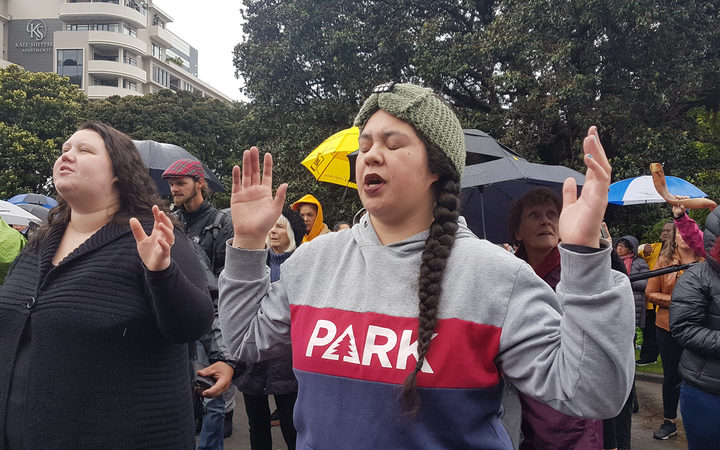 The prayer is read at the start of each parliamentary sitting session.

When he was appointed Speaker of the House, Trevor Mallard removed references to both Jesus and the Queen and provided for the prayer to be read in te reo Māori.

The reference to a "God" was left in but does not specifically refer to the Christian God.

Today's rally was arranged by the group Jesus for New Zealand and included prayers by pastors from a number of evangelical churches.

Event organiser Ross Smith said New Zealand had a Christian heritage that he did not want erased.

"It's a legacy. The principals and the values that are in this nation are based on our Christian-Judea roots."

Removing the name would destroy those roots, he said.

Mr Smith said members of other religions he had spoken to supported his cause.

"So for instance Muslims come in and they say 'listen don't take the name of Jesus Christ out, where's the integrity in that?'

"Other people coming in expect us to uphold our values and stick by them- they actually appreciate that."

Another protester, Rieki Teutscher, said she was shocked when the Speaker announced his decision.

"He needs a good kick in his pants, and he needs to actually be removed because this is a Christian nation," she said.

Carmel Morgan who travelled from Whanganui said if Mr Mallard was deadset on changing the prayer he should have had a referendum on it first.

"If he is going to make a decision like that he should at least do it with the peoples acknowledgement, you know?

Inside the Beehive, Deputy Prime Minister Winston Peters said the decision to remove the name of Christ should have been a decision for all of Parliament.

"Well the decision as to what should be changed should be made by Parliamentarians and not the speaker - that's our position, I don't mind telling you publicly," he said.

"If you're going to make a change let's have Parliament decide - not one person." 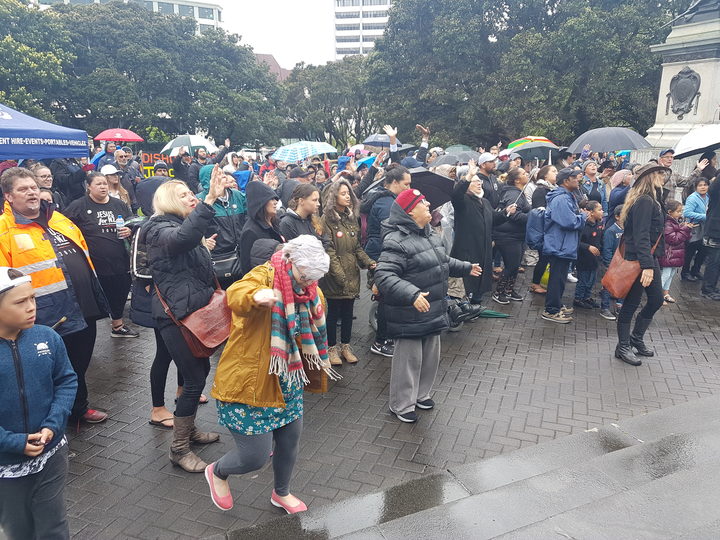 Hundreds descended on Parliament to protest against the change to the prayer. Photo: RNZ / Katie Doyle

Mr Mallard said at the time he made the changes that it was about making the prayer more inclusive.

"I think that having the prayer in its self sets a good tone for Parliament but it has been done in a way that the Speaker has tried to make a bit more inclusive."

Ms Ardern said she was pleased the tradition of the prayer remains and understood why Mr Mallard made the changes.

"What happened here is Trevor Mallard didn't consult and he should have done that I think it really comes back to that and I think if he did he would have come to a different position," he says.

"I don't think it was his decision to make alone."

Mr Bridges said several Speakers in the past had explored the possibility of removing Jesus from the prayer and ultimately decided against it following advice.

"I don't have a particularly strong view about the prayer, I mean it's not something that I think necessarily affects people's faiths."