The biggest challenge this year was dealing with the disciplinary issues relating to two of her ministers, says Jacinda Ardern as she takes stock after a year in government. 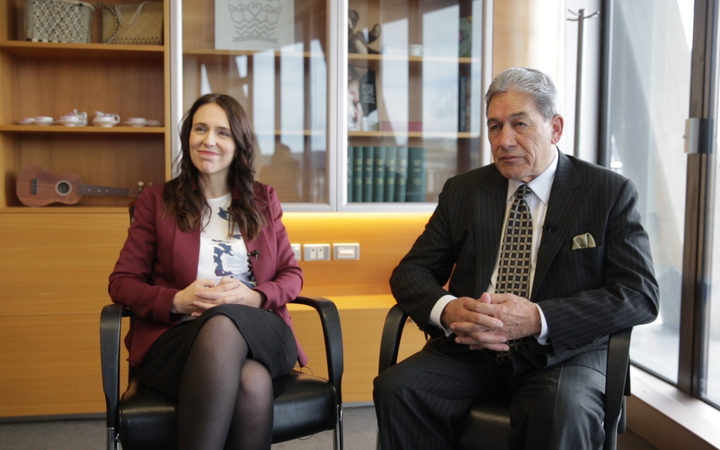 The Prime Minister and her deputy Winston Peters have given a wide ranging interview to mark the first year anniversary of the formation of the coalition, a year of both political turbulence and intense activity for the new administration.

Ms Ardern said the key to developing a relationship with Mr Peters and his party was communication.

"So just making sure that we talk to one another when issues were coming up...we've got a great team around us who work closely together."

Sitting across from one another during the intense coalition negotiations was also part of the process, she said.

"We had a really clear view at the end of that...of the areas where we actually had common ground and areas we wanted to prioritise, and areas we needed to keep talking."

That laid the foundation, said Ms Ardern, "right from the beginning."

There had been some "seriously constructive", reformative governments going back to Seddon's time, added Winston Peters.

"Without being smug or overconfident, what we're seeking to do here is to have another great period of New Zealand government because we are addressing the economic and social needs of people."

The government was not "myopically philosophical" and he believed the government can increase its public support.

"I know the Greens have a philosophy, I know the Labour Party has a serious philosophy and so do we, but in the end it's your end result in delivering an improvement of the human condition in New Zealand that will make or break this government."

Tests of leadership and the coalition relatonship

There was nothing Ms Adern would identify has having "been a test" for either her relationship with Mr Peters, or between their two parties.

"Any example anyone's put to me I've simply seen that as us forming consensus through compromise and discussion."

For her the test was more of a from a "personal leadership perspective".

"Losing members of the Labour team, that's been tough because you don't work in a political environment and not get to know people.

"You form relationships with the people you work alongside but at the same time I have a role to play in maintaining a standard within my team and within Cabinet and so having to make decisive decisions about team members - that's a test."

They were her "low-lights", rather than anything to do with the coalition.

And in hindsight there would always be things she could have handled differently, said Ms Ardern.

"And to claim that you handled things perfectly, 100 percent of the time, somehow shows that you think you're immune to those learnings."

From Mr Peters' point of view there have been a number of occasions that could have been viewed as a test.

"When you could say this is what we expected and we got past it, in every case by following our regime or proper dialogue, respectful negotiations, writing down in plain english what our view was as to how to go forward."

Ms Ardern said when multiple decisions were being made every day, there would be discussion about different options, but she said that should not automatically be presented as "discord".

There has been scrutiny on New Zealand's response to events related to Russia, and whether two coalition partners, and their leaders, have a consistent position on the relationship between the two countries.

"Yes, yes, yes we are", was the Prime Minister's answer to the question.

Mr Peters chipped in, adding that if someone is a lawyer, and inquiry starts, "you usually consign your decison-making until when the inquiry's over".

He was alluding to the international response to the investigation into the Salisbury poisonings; other countries like the United Kingdom and Australia condemned Russia out of the blocks, with New Zealand reluctant to follow suit.

"The UK started an inquiry and on day two the media were screaming out, why don't you condemn the Russians, and the inquiry hadn't even gotten underway."

It paid to take a cautious approach, said Mr Peters, using the example of the killing of journalist Jamal Khashoggi at the Saudi Arabian misson in Turkey.

"It's been wise for us to sit here and wait to see what the Turks have been able to glean from their investigations...we could have jumped in and criticised the journalist being murdered, not we can do it from a point of knowledge."

New Zealand has a close relationship, including an FTA, with China but is keeping a wary eye on regional power dynamics.

It's also working to upgrade that free trade deal, New Zealand and China struck a decade ago.

Ms Ardern maintains New Zealand's relationship with China has always been consistent and where there are concerns, whether it be human rights or upholding international rules, they are highlighted in a direct way.

Regarding the free trade upgrade, Mr Peters pointed out that New Zealand is starting from a position of having already given the world "total access to our country", which makes it difficult to turn around and ask for the same in return.

"You're always struggling when you've got nothing to trade."

"They're saying what's in it for us and I'm thinking, you're right mate, there's nothing in it for you because you've already got total access to my country,'' he said.

Mr Peters says the changes to the Overseas Investment Act banning nearly all foreigners from buying Kiwi homes didn't cause the scene some had suggested.

"The reality is the Chinese government didn't understand why we had the previous policy, they utterly understand a government needing to preserve its land ownership and its house ownership. In my view they were amused by our policy while their people were taking full advantage of it,'' he said.