The government books remain in a healthy state, as Treasury reports the final results for the past financial year. 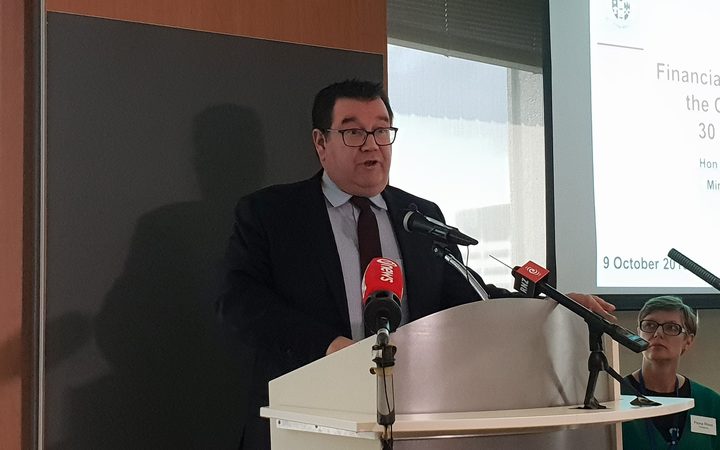 It shows a $5.5 billion surplus, up $2.4b on the Budget predictions back in May.

However this is partly due to the timing of some of the planned spending - including big capital spends in health, education and transport - so that surplus figure is expected to drop back once that starts to roll out in the coming months.

The tax take was up by $4.6 billion on the year before, boosted by more GST, corporate tax and income tax.

The economy grew by 2.8 percent which is broadly in line with Budget forecasts. Average wages were up 3 percent and the number of people in employment grew at the same rate.

The strong growth has been attributed to residential construction and spending on tourism. New Zealand's population has also grown by 2 percent, with net migration of 65,000 people.

Delivering surpluses, the level of government spending and net debt targets are among the Budget Responsibility Rules the Labour Party set for itself before last year's general election.

Finance Minister Grant Robertson said the government was committed to those rules to make sure New Zealand was in a position to "deal with any rainy day".

He said there are clouds on the horizon like rising international trade protectionism, and this country needs to be well placed to respond to any flow-on effects.

The financial statements released today show what happened in the 2017/2018 year, but do not provide forecasts into the future.

Also flagged was a potentially significant bill for the government as it worked through problems with the Holidays Act, and compensating people where they have been underpaid in past years.

The Auditor General noted this could affect a "significant amount of current and former public servants" but because of the level of uncertainty involved, a number can not yet be put on it.

Other big costs this coming year include $94 million for the kiwifruit vine disease PSA, the major response to eradicate Mycoplasma bovis, and paying out people from the red-zone in Christchurch.

In response to questions about pay claims for teachers and calls for the government to freeze increases to fuel excise, Mr Robertson said he had to look beyond the immediate demands on the government, and make sure the books were in good enough shape to deal with any future challenges.

"The long term growth for New Zealand will be a bit bumpy", he said, particularly as New Zealand tried to move away from population growth as the main driver of economic growth.

Any questions about whether there should be any tax cuts in the future still rests with the Tax Working Group, said Mr Robertson, which is due to present its final report in February.

An economist said the accounts were credible and the government's financial position sound.

"The surplus is increasing, net debt is down and if you look at in not just in an historical context but also in global context these are very good numbers," BNZ senior economist Craig Ebert said.

However, he said Grant Robertson was right to be cautious about future spending and the need to be prepared for any number of shocks that might hit the economy.

"He's clearly cautious that the accounts, good as they are at the moment, may not look as rosy in the coming years, and there are risks out there that do bare watching."

Financial markets were unmoved by the accounts.

National Party leader Simon Bridges said the surplus demonstrated that the government could have afforded to implement tax cuts and that it had been wrong to cancel its planned tax cuts.

The coalition government cancelled the cuts in favour of a Families Package, which aimed to benefit low-to-middle income New Zealanders.

Meanwhile, the primary teachers' union New Zealand Educational Institute said the surplus showed the government had the money to solve what it said was a crisis in the sector.

Teachers in both primary and secondary are considering further strikes, saying offers on the table aren't enough to improve pay and address workloads.

The Finance Minister Grant Robertson said it was imperative the government ensures there is enouigh money for a "rainy day".