The Regional Economic Development Minister wants a physical bank to remain in Martinborough to serve the locals. 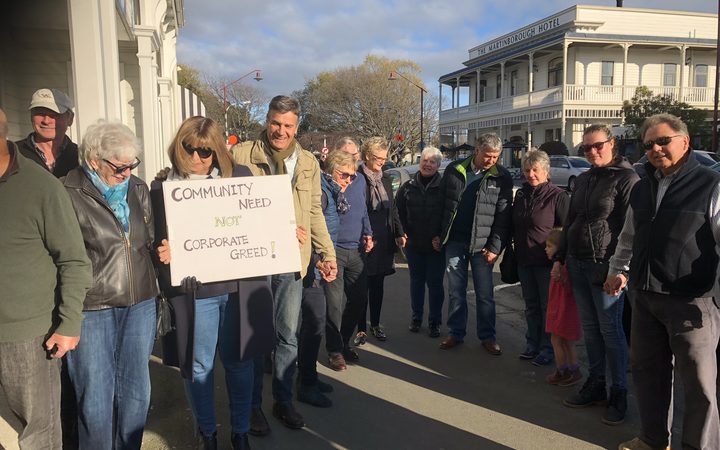 A recent protest over the planned closure of ANZ in Martinborough. Photo: Supplied

The Australian-owned ANZ bank is closing its branch in the South Wairarapa town because of a drop in over-the-counter transactions.

Despite protest action from residents, ANZ remains intent on shutting it next month.

Speaking from this weekend's New Zealand First conference in Tauranga, minister Shane Jones said Martinborough must have a bank branch.

Shane Jones said party members were worried about what he called 'Aussie-owned monsters' closing branches up and down the country.

Three remits put forward by party members yesterday looked to address the limited hours banks are operating and, in some towns, the disappearance of banks altogether.

The remits seek to force local and central government to use Kiwibank, have the Crown wholly buy back Kiwibank, and introduce a levy as a condition of banking licences to fund more banks in regional New Zealand, and for longer hours.

And New Zealand First party members expressed an interest in having a locally owned bank fill the gaps.

"Whilst people see a role for Kiwibank the qualification is a Kiwibank so it may not always be Kiwibank but banks owned by Kiwis where the profits remain in the New Zealand community," said Mr Jones.