More than 100 Martinborough residents protested at the town's ANZ branch this afternoon, in a bid to halt the closure of the town's last remaining bank. 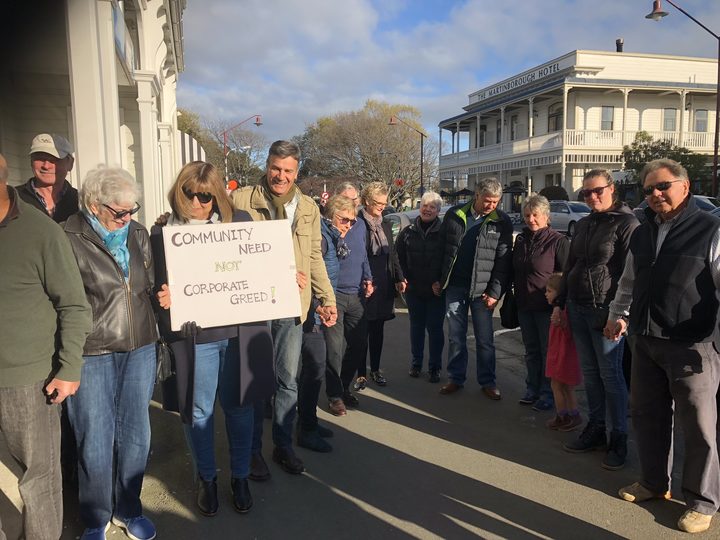 ANZ hasn't offered staff at its Martinborough branch redundancy because it expects them to commute to Masterton.

It follows a meeting with the bank's three staff today, where they were told the branch would close on 19 October.

The Wairarapa-based Labour MP Kieran McAnulty said the initial offer to the staff did not include redundancy because the bank felt the distance between Masterton and Martinborough was a commutable distance.

"I pointed out that the Pahiatua staff were offered redundancy and the difference between Pahiatua and Dannevirke - the closest branch - was less than the travel time between Masterton and Martinborough, so that's a work in progress."

Today more than 100 residents gathered at the bank to voice their opposition to the closure.

ANZ said the bank had seen a 6.3 percent drop in transactions in the past year, adding that eight out of 10 ANZ Martinborough customers had not visited the Kitchener Street branch this year.

But Mr McAnulty, who was at today's protest, said the bank had underestimated what a vibrant district Martinborough was and in doing so had missed an opportunity.

"If you just look at the stats for the last year alone, South Wairarapa outperformed Queenstown, Wellington and the New Zealand average in terms of GDP growth, retail spend, tourism spend and guest nights.

"This is a vibrant area on the back door to Wellington that is seeing growth year on year and I think the ANZ have missed an opportunity to capitalise on that, looking just at the corporate balance sheet rather than what they could do in this area," he said.

In a statement ANZ said it had spent about $200 million in the past four years installing and upgrading digital technology, internet and phone banking in response to changing customer demands for banking services 24/7. This flexibility means people don't have to go to the branch to do their banking.

But locals disagreed. Another protester and local resident, Dean di Bona, said some in the community relied on face-to-face contact.

"We have an aged care facility here and a lot of people here can't even understand technology and they need to be brought down to the bank to do cash withdrawals at the counter," he said.

And he said the installation of a SmartATM in the town was not an option for some businesses.

"Especially cash deposits. They talk about 'smart banking' and all these machines but the problem is when you go into the bank there's a lot of security cameras and a safe zone. But when you are actually out on the street trying to use an ATM that's quite dangerous and you can't even watch your back when you are trying to deposit and it's quite a time-consuming process," he said.

Mr McAnulty said as a result of the closure, businesses had no choice but to travel the 45 minutes to Masterton to do their day to day banking.

"That's going to increase costs, it's going to make them reconsider investment options or whether or not the business now fits the lifestyle that they wanted in this area. The type of business they've got catering to the tourism trade - is it actually possible to travel that 45 minute one way trip to Masterton?"

Residents are also angry the bank has not responded to residents' submissions, which included efforts to try and find a solution.

Mr di Bona said one option was for a mobile bank.

"Why can't they drive around and one day a week, one day a fortnight or one day a month be at a town, there would be plenty of staff that used to work at the bank that could man these on a periodic basis," he said.

An ANZ spokesperson said the bank would not be reviewing its decision and the branch would still close on 19 October.