National Party leader Simon Bridges says police told him they know the identity of the texter claiming responsibility for leaking his expenses but they won't tell him who it is.

RNZ revealed this morning a person who claimed to be the National Party leaker pleaded in an anonymous text for the inquiry to be called off. They warned they suffered from mental health problems in the past and said being exposed publicly could push them over the edge.

In a media conference soon after, Mr Bridges confirmed he had received a "dark and concerning" message on Thursday last week along with Parliament's speaker Trevor Mallard and a media organisation.

Mr Bridges said the text made it clear to him that it was from the leaker.

"The text stated that the leaker was in the National caucus," Mr Bridges told media.

"It also made quite clear that this person had a prolonged serious mental illness ...and their very clear view in the text message that there would be significant harm to them if the investigation by Speaker Mallard proceeded.

"It was an incredibly dark, concerning text message."

Mr Bridges said he messaged the person back and made clear his concern was for their well-being.

He said he received expert mental health advice on how to proceed and on Friday, he informed police.

"On Sunday evening, police contacted me. They made it clear they knew, they had worked out the identity of the person concerned.

"They made clear to me the person was getting the help that they need."

Mr Bridges said he specifically asked the police about the potential impact of the inquiry on the leaker.

"At no time did police tell me that the investigation should not proceed."

Police would not tell the National Party leader who the texter was in the interest of their privacy, Mr Bridges said.

The leaker attempted to verify their identity as a National MP in their message by detailing conversations and details from various caucus meetings.

But Mr Bridges played down the veracity of those claims, saying there were "a range of credible scenarios". 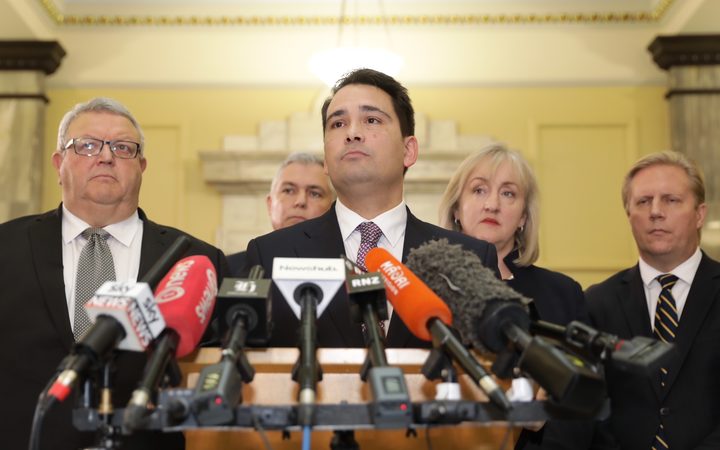 National Party leader Simon Bridges talks about the leak of a text claiming to be from person behind an earlier leak of his expense spending. Photo: RNZ / Rebekah Parsons-King

Mr Bridges conceded it had to have been someone with both Mr Bridges' and Mr Mallard's phone numbers.

He rejected that pressing ahead with the inquiry was putting someone's life at risk and said it was important to identify the leaker in order to protect the integrity of Parliament.

"I'm not a cold-hearted person. I have real concern for this person's well-being," he said.

"But ultimately we don't know what we're dealing with here, whether it is frankly a more cynical manipulation of the system."

He would not rule out the possibility of the leaker being named publicly if the inquiry identified them.

"That's one approach. I think that will be something that [inquiry head] Mike Heron QC will work his way through."

Asked whether a second potential leak from within the National caucus meant his leadership was under threat, Mr Bridges said he was "very confident" in his MPs' strong support.

"Ultimately, this isn't about the National Party. It's about something more than that, it's about the wellbeing of someone... and also it's about the integrity of the overall system."

Mr Bridges said he "certainly had not heard anything" from MPs in his caucus to suggest anyone disagreed with his approach.

"No one has expressed that view."

Police say any requests for information by the inquiry will be considered on the basis of privacy principles, and they may seek advice regarding such requests.

In a statement, they said they had dealt with the matter entirely from a mental health perspective.

The National Party contacted police on Friday 17 August "regarding concerns about the welfare of an individual" and police met Mr Bridges regarding those concerns that same day, the statement said.

Prime Minister Jacinda Ardern said matters such as a leak from within a party would be for the individual party to deal with.

"Ultimately the leader of the National Party just will have more information than we do, but if indeed this is an issue that's come [out] of the caucus and if there are indeed mental health issues ... it would need to be dealt with really sensitively, and perhaps if that is the case best dealt with internally."

Whether the QC inquiry should go ahead was dependent on whether this was, in fact, an internal party issue.

"That's something the leader of the opposition will have information on, but ultimately, these things ... would need to be dealt with sensitively."

The text, which RNZ has not seen, detailed a number of conversations and pieces of information from National caucus meetings over a period of weeks in an attempt to prove the author was a National MP.

The anonymous appeal came after Parliament's Speaker Trevor Mallard launched an inquiry into who leaked the expense details and promised to name and shame the person responsible.

Mr Mallard was contacted yesterday morning about the text message but he refused to comment. Soon after, he announced the appointment of Queen's Counsel Michael Heron to lead the inquiry.