The deadlock over Ngāpuhi treaty negotiations shows no sign of breaking, with people leaving a series of hui over the weekend frustrated, and without any resolution. 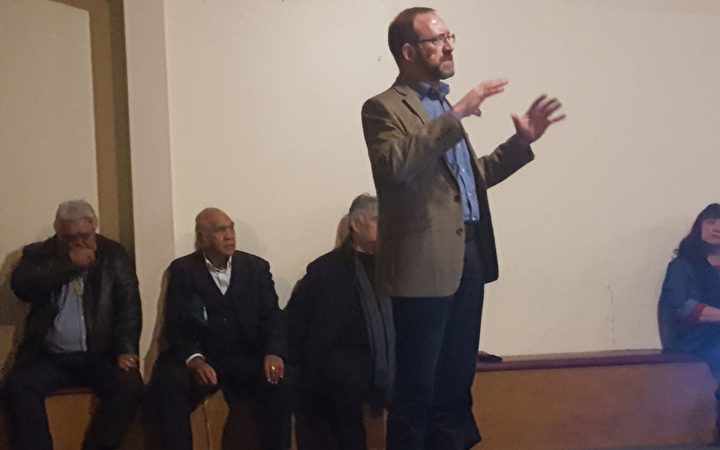 Andrew Little at the first Ngāpuhi hui of the weekend at Otangarei Marae in Whangārei. Photo: RNZ / Lois Williams

Treaty Settlements Minister Andrew Little held six hui in Northland in an attempt to persuade hapū to allow a new structure to represent them in negotiations.

"I think people went away from the hui - and probably even the minister - feeling quite frustrated," he said.

"We were certainly [frustrated] at what we were hearing coming back the other way."

Asked whether the parties were any closer to resolution, Mr Tipene said they were "further apart".

"But let's let the dust settle. Let's all think as grown-ups and in a sophisticated and strategic way and keep working together.

"What we can't do is walk away from the table ... there's too much at stake."

Mr Tipene is one of four Ngāpuhi leaders who have been meeting with Mr Little since March to resolve the row over who represents the hapū, and who should negotiate a settlement.

He and Hokianga spokesman Rudy Taylor have spoken for Te Kotahitanga.

Tuhoronuku has been represented at the talks by its chair, Hone Sadler, and the rūnanga chair, Raniera Sonny Tau.

Tuhoronuku favours keeping Ngāpuhi's commercial redress in one package to maximise the iwi's economic power, while the hapū alliance wants six settlements based on natural groupings in the north.

Mr Tipene warned hapū would split away if Mr Little refused to listen to them, but said he got the sense that Mr Little was engaging over the weekend.

"He was making changes as he went along, and they were small, but significant changes, such as saying he would go back and consider resourcing the hapū of Ngāpuhi to learn more about the report."

The four Ngāpuhi leaders will meet again with Mr Little to consider the feedback and make adjustments.

"The people of Ngāpuhi will be watching to see if the adjustment goes far enough," Mr Tipene said.

The solution 'is there'

However, Mr Little told Morning Report Mr Tipene didn't speak for all of Ngāpuhi, and a number of hapu representatives were keen to "engage and discuss".

"I wasn't looking for a decision or a show of hands or any of that stuff over the weekend. This is about getting information out, starting the discussion and the debate," he said.

Mr Little said the proposal would look at addressing the aspirations of all six groups, with the Crown engaging dirctly at that level.

"I think the solution is there and ... over the weekend people got a chance to see at least something that they can start to talk around. There is a lot of detail yet to fill out."