The public and the media have been challenged to take an evidence-based approach to crime and justice, rather than letting the debate be dominated by emotion. 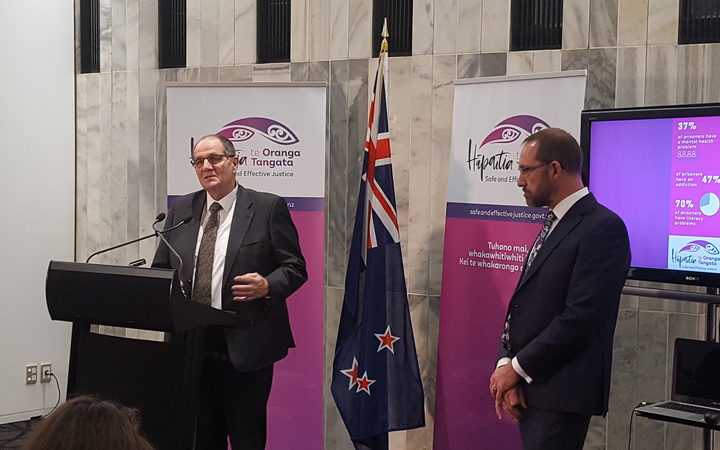 Mr Borrows says it's important to concentrate on the evidence for crime and justice and asked the media to consider that. Photo: RNZ/Jo Moir

Former National MP and Courts Minister Chester Borrows laid down the gauntlet, at the formal launch of the criminal justice advisory group at Parliament this morning.

There's been plenty of debate about record-high prisoner numbers and whether the best course of action is to build more prisons or focus on rehabilitation and getting more people out into the community.

Justice Minister Andrew Little said a summit in Wellington next month along with the work by the advisory group, which Mr Borrows will lead, will help shape the reforms.

The group includes victims' advocate Ruth Money, who Mr Little said assisted him in meeting with the parents of murdered teenager Christie Marceau.

That conversation emphasised for him the important role of victims and their families in the creation of good criminal justice policy.

"For a family like the Marceau family, who has this tragedy inflicted upon them, which few of us could really imagine what it must feel like. Then to feel as if the system - they don't have a place in the system - I think that is totally wrong.''

Mr Borrows said it was important to keep the emotion out of the reforms and concentrate on the evidence and asked the media to consider that in its reporting.

"Don't drag out some poor already victimised person or relative of a victim and then stand them up to argue emotively against evidence-based.''

Mr Borrows accepted the advisory group would need to take the same advice, especially given his colleague Ms Money has spent years putting victims' families forward to highlight issues with the justice sector.

National's justice spokesman Mark Mitchell said Mr Borrows was competent and will do a good job but it would not be easy.

"I think he's got a tough job because the government's already pre-determined really in terms of where they're going and that's going to be the softening of bail laws, sentencing laws, parole laws," he said.

"So I'm not sure how the advisory board is really going to be able to turn that round - it will be interesting.''

Mr Mitchell would like to see enduring policy but he said the National Party would find it difficult to back reforms that will "erode public safety''.