Senior government ministers have refused to be drawn into a full-blown coalition dispute over the three strikes law, with Labour and New Zealand First trying to shut the story down. 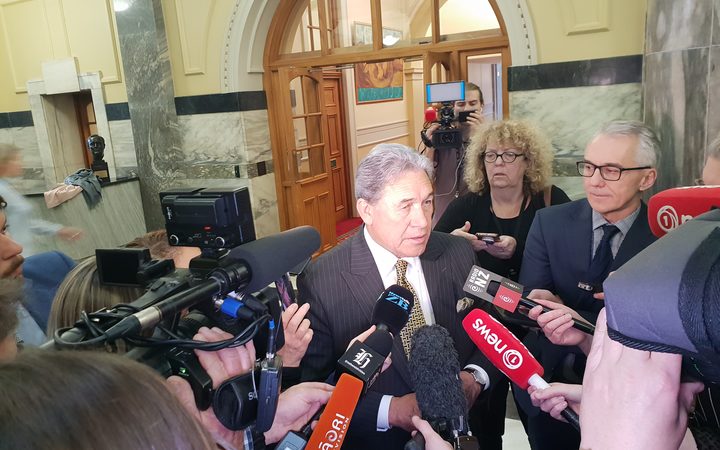 New Zealand First leader Winston Peters has refused to be dragged into criticism over the repeal on the three strikes law. Photo: RNZ/Chris Bramwell

Justice Minister Andrew Little was forced to shelve a Cabinet paper repealing the controversial sentencing law, after what he said was a "rethink" by New Zealand First.

The 2010 law set up a system of increasing consequences for repeat serious violent offenders.

On his way into caucus this morning, Mr Little was asked whether New Zealand First had initially committed its support for the three strikes repeal, then changed its mind.

He refused to answer the question directly saying there were "hoops" to jump through whenever policy was being prepared to take to Cabinet.

"I'm going to give an answer and you can do what you want with it ... in order for a proposal to get to Cabinet you've got to go through a number of processes."

National MP and Justice spokesperson Mark Mitchell was, however, prepared to give his view on what happened.

"He [Andrew Little] was stabbed in the back by New Zealand First," Mr Mitchell said.

It was a view that was promptly dismissed by NZ First leader and deputy prime minister Winston Peters.

"If you're going to repeat the language of a police dog handler that's fine with me," he said.

He too was unwilling, however, to talk about the discussions which led to the Cabinet paper being pulled.

"I'm not going to analyse what happened here ... a lot of conversations happened over a long period of time, it's how a sound coalition works and I'm happy with the outcome," Mr Peters said.

"I don't know what Andrew Little said, I'm not here to bandy the words with you or anyone else."

He did say his party had kept a consistent stance on three strikes - to support it - which was a position reaffirmed by the caucus.

When it was put to him Mr Little had jumped the gun by announcing the Cabinet paper a few weeks ago, Mr Peters said it was not for him to comment.

"I'm not going to get dragged into this vortex of nothingness."

Alongside the debate about three strikes there has also been plenty of discussion about how to improve rehabilitation rates and lower the prison muster.

The previous National government had planned a 3000-bed mega prison at Waikeria - this government will not proceed with that but will announce its plan tomorrow.

A criminal justice summit will be held in August, after which Mr Little will start work on a broader package of reforms, including changes to bail and parole laws.