Prime Minister Jacinda Ardern will formally hand over to her deputy Winston Peters, once she arrives at hospital to give birth. 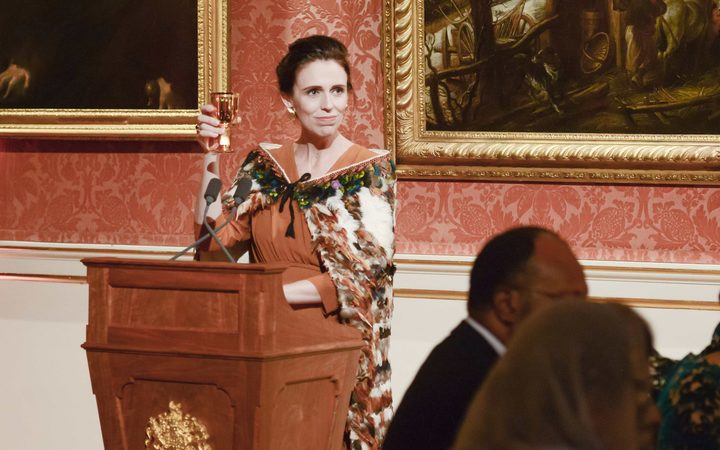 Prime Minister Jacinda Ardern makes a toast to the Commonwealth at a state dinner at Buckingham Palace Photo: Supplied - Pool

Her office has released details about her public plans once the baby is born - the due date is 17 June.

If she is in Auckland Ms Ardern will go to Auckland Hospital, but there are contingency plans if she is elsewhere.

She has already said she will work up until she goes into labour, and Parliament resumes sitting next week for a four-week session.

Ms Ardern and Clarke Gayford will announce the birth which will be followed by a formal announcement from the Prime Minister's office.

They will come out for photos and will take some questions when they leave the hospital.

However, after that they have asked the media to respect the family's privacy in the weeks Ms Ardern is taking parental leave.

She will do a round of interviews with New Zealand media outlets closer to the time she intends to return to work.

Last week Ms Ardern was asked when she intended to slow down.

"Ah yeah, that's a question that some of my family have been asking me," she said.

"I do have a few more things that I'd like to get through ... but I am taking a bit of breather in between, but otherwise it's all manageable."

She said she was at the point where the birth could happen any day.

"That's just a statement of fact... I haven't got any particular reason to know that or believe it, I'm just at the stage where it could," Ms Ardern said.