A major overhaul of how water is regulated and delivered could be on the cards, with the government keen on fewer, larger suppliers. 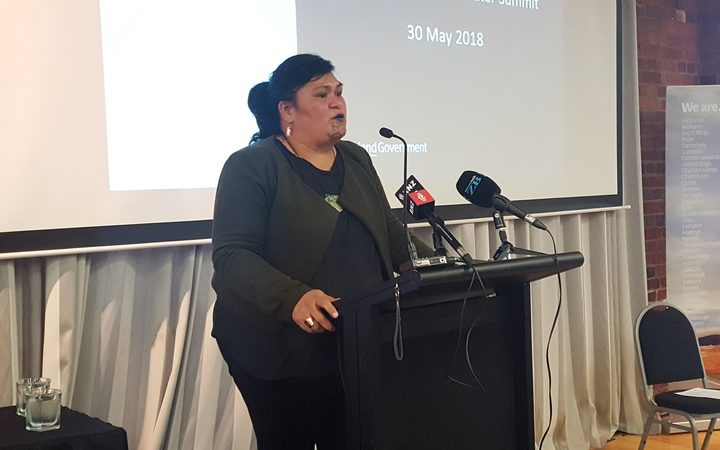 Local government minister Nanaia Mahuta says the government is open to a range of options regarding an overhaul of the water system. Photo: RNZ/Craig McCulloch

"This is the conversation that we need everyone to be thinking about, because the Havelock North report says things need to change," Ms Mahuta said.

The Havelock North inquiry, which reported back six months ago, found nearly 800,000 New Zealanders were drinking water that was "not demonstrably safe".

The inquiry made 51 recommendations, including streamlining the number of water suppliers.

A separate 'Three Waters Review' by the Department of Internal Affairs found drinking water, wastewater and stormwater services were "inconsistent and patchy".

Speaking to media after her speech, Ms Mahuta said the government was open to a range of options, but "issues of scale" might improve the entire service.

New Zealand had roughly 68 territorial authorities supplying water around the country, she said.

She put two proposals to the summit - either moving to regional or cross-regional publicly-owned water providers.

"This is an open conversation ... we're not ruling anything in or out," Ms Mahuta said.

She pointed to Wellington Water as an example, which supplied water to residents and businesses in Lower Hutt, Porirua, Upper Hutt and Wellington.

"They have been able to support a more consistent service delivery model where the cost gains ... have applied to the positive benefit of ratepayers," she said.

The government was also looking at other countries such as Scotland, which has just one central water service, though she said she was not sure that would work in New Zealand.

"It's got to be an option that suits the New Zealand context in order to ensure good, reliable water service delivery."

A more aggregated approach would result in urban ratepayers effectively subsidising those in the regions.

"That is a very real prospect and in some places, that could be an advantage," Ms Mahuta said.

"Obviously rural water suppliers [and] rural communities struggle with keeping up with investment in their asset infrastructure."

Ministers would consult local government, water industry stakeholders and Māori before reporting back to Cabinet in October with "high level options".

"There are no pre-determined solutions and lots of work still needs to happen," Ms Mahuta said.