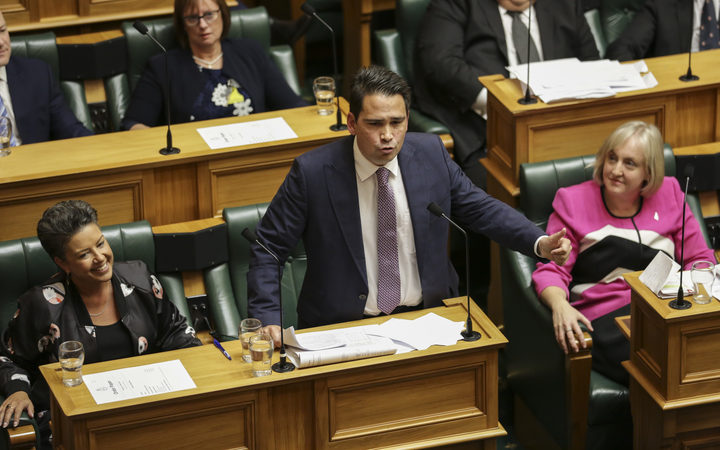 The Labour-led coalition government has delivered a restrained and cautious Budget in its first year, keeping money in the kitty instead of embarking on a major spend-up.

It is investing more money in health, education and housing - while also forecasting a more than $3 billion surplus this year.

However, National's leader Simon Bridges said the government inherited a solid economy from his party, yet had taken a "tax and spend, borrow and hope" approach to this budget.

"Labour spent the last nine years calling everything a crisis, yet today's budget provides no new solutions to back up their claims," Mr Bridges said.

"They've dressed it up with rhetoric like 'starved for funding' and 'deficit support' but the truth is even their health budget is underwhelming, and commits less each year than National did in the last budget."

The budget was littered with broken promises.

"No universal cheaper doctors visits, 1800 extra cops that aren't happening when they said, no money for Dunedin hospital, not to mention a raft of new taxes from a government that promised 'no new taxes' in its first term."

She came after deputy prime minister Winston Peters during the Budget debate in parliament, for using the phrase "make New Zealand great again" during his own speech.

"This country is great, Mr Peters. The only thing that would make it better would be getting rid of him and his government."

Act MP David Seymour also took aim at Mr Peters, saying he missed Winston Peter's speech but could tell everyone what it said because "it has not changed for 40 years".

"What a tragedy of a political career to have such nice hair, such nice teeth, such a nice voice, but to have done so little."

The Budget was "a lolly scramble" of money being thrown to special interest groups, Mr Seymour said.

"Every single New Zealander could have received a tax cut in this Budget but instead it's going to be sprayed around cynically at people the government thinks will vote for it."