As the media reported on the government's first budget, so did Twitter. 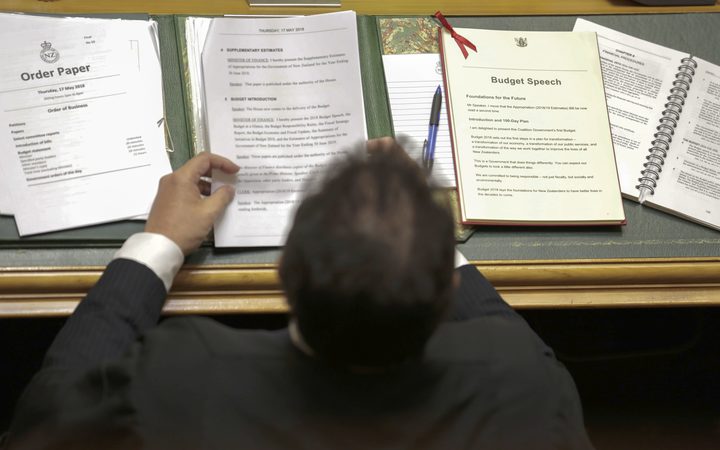 The view from Grant Robertson's seat as he delivers his first Budget to Parliament. Photo: RNZ / Richard Tindiller

Get all our Budget 2018 coverage here.

First things first, Twitter was notably quiet, while all the political journalists were locked away digesting both the budget documents, and the sausage rolls.

NZ Twitter has been a sad and barren place with the entire press gallery gone dark in the Budget lock-up. #Bminus45

With a nod to my southern roots, its cheese rolls with the PM for my Budget morning snack @jacindaardern pic.twitter.com/gXnZ8Ctyl9

Former PM Bill English had a tradition of a Budget Day pie for lunch. The class of 2017 kept the tradition going! pic.twitter.com/R4jnZMKoIm

Right on the dot of 2pm came the alerts, the wraps and the analysis.

The Labour-led government has delivered a restrained and cautious Budget in its first year, keeping money in the kitty instead of a major spend up. #Budget2018https://t.co/KXwFx8mmeu

And then, just as swiftly, the reactions.

Grant announces planned surplus and David Clark says "well done", as if he's had something to do with it #budget2018

This is a Govt that’s taxing more, spending more, borrowing even more than they had said and hoping that their broken promises are not noticed #budget2018 #taxandspend

We’ve made health the top priority in this Budget, and we’re rebuilding our health system so everyone can get the care they need. This includes cheaper GP visits for more than half a million New Zealanders, and free GP visits for everyone under 14. #Budget2018 pic.twitter.com/r942cVqE98

This is the greenest budget ever, with the largest ever budget allocation for Green Party projects - $618 million & up to $13.5 billion for transport projects #Budget2018 https://t.co/mxyuIPtlTs

The big thing missing in #Budget2018 is any meaningful help for Kiwi workers. In fact middle-income families are getting steadily worse off, with the cancellation of National's tax changes and the coming big increases in fuel taxes.

As the Minister of Finance said, if we invest in the wellbeing of our children (their mums, and the women who look after them at the most critical time), we will be a rich society indeed! Thank you midwives! #budget2018 #nzpol #midwives pic.twitter.com/DZaNO3rVLP

And then, the reckons.

Huh, on first glance of the summaries of #Budget2018 I’m … well, a little disappointed really. ‘Whelmed’ for want of a better term.

Who cares about a surplus when we’re trying to fix the disaster National left us with? I wanted something more bold to be quite honest.

to people whinging about nz's #budget2018 having 'nothing for them', you've had things given to you the past 9 years. nz has many demographics suffering from systemic inequality that this is attempting to begin fixing, so pipe down and go back to reading the herald #nzpol

Watching #NZBudget2018 at the Backbencher with @bryce_edwards, who was in the lockup. His verdict? 'The fiscally responsible nothing burger budget' #nzpol pic.twitter.com/IoaBBj7x68