Further details have emerged about the interaction between the office of the Broadcasting Minister and the RNZ board chair Richard Griffin, who told MPs it left him "gobsmacked". 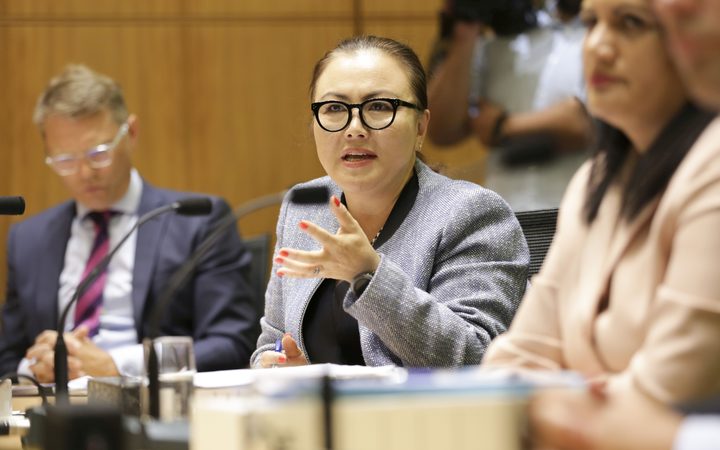 Mr Griffin said he received a phone call from a staff member in Clare Curran's office, during which it was confirmed he and the chief executive Paul Thompson had misled a parliamentary committee.

RNZ's top brass apologised to MPs this morning for inadvertently misleading the committee over a meeting that cost former Head of News Carol Hirschfeld her job.

Early last month chief executive Paul Thompson and Mr Griffin told the committee a meeting between Ms Hirschfeld and Ms Curran was a chance encounter, but it later emerged Ms Hirschfeld had lied to her boss and the meeting had been pre-planned.

Today there was a large media presence as Mr Thompson and Mr Griffin returned to the committee, saying they were deeply embarrassed to have found themselves in this position, and apologised to committee members.

Mr Griffin also went into more detail about how he found out he and Mr Thompson has misled the committee.

He said he has been contacted on 21 March and told "the integrity of the CEO and the Chair was at serious risk" due to the assurances they had given to MPs about the nature of the meeting between Ms Hirschfeld and the minister.

The following day, according to a timeline formally submitted to the committee, Mr Griffin received a phone call from the "Minister's Office" just before question time, and was told there were questions up that afternoon to the minister, and the meeting could be raised in those questions.

"I was told that if the matter was raised, the Minister and her staff would be responding as they felt appropriate and that they expected there would be 'no comment' from RNZ.

"I asked if that meant the meeting was in fact arranged prior to December 5th and I was told that was the case", said Mr Griffin in his statement.

Today Mr Griffin told MPs "the staffer's attitude was 'we will handle this appropriately but we'd like you basically to stay out of it'".

"I was gobsmacked, given the information I'd received the day before, that I was taken with a grain of salt", he said.

The minister responded to those claims in a statement.

"I am assured that my staff did not say, on either of those dates, that 'they expected there would be no comment from RNZ'.

"I'm also assured the office never said to Mr Griffin that 'we would like RNZ to stay out of it'.

The minister's primary concern and that of her staff, said the statement, was that "RNZ had misled the select committee by repeating claims from Carol Hirschfeld that it was a chance meeting".

"My office told RNZ and Mr Griffin that it was a pre-arranged meeting and that as asked I would confirm that because that was the truth."

Mr Griffin was also asked about a voice mail message left on his phone by the minister on Thursday March 22nd.

In his timeline Mr Griffin said the minister "put a letter in front of the Select Committee ... correcting the original statements and thus avoiding an appearance in front of the committee".

Ms Curran has denied any suggestion she tried to prevent RNZ reappearing today.

As the hearing wrapped up one of the National's MPs Melissa Lee requested Mr Griffin be made to hand over that voice mail and all communications between Ms Hirschfeld and the minister to the committee.

RNZ today said that if it could recover the voice mail message, it would release it to a parliamentary select committee.

There were also questions from Labour MPs about the phone call Mr Griffin made to Ms Lee minutes before RNZ went public with Ms Hirschfeld's resignation last week.

Mr Griffin said he made the call as a matter of courtesy because she had been the MP asking the questions about the meeting.

He bridled at the remark from Labour's Paul Eagle that "there's courtesy, and there's collusion".

Another Labour MP, Deborah Russell, put it to the RNZ chair "there would be a lot of concern around the fact that someone who is appointed to this role, a former National Party press secretary, has then contacted..."

There were further questions about exactly what was discussed in the meeting between Hirschfeld and Ms Curran, but Mr Griffin told MPs that those two were the only ones who would ever really know.

Mr Thompson said he was misled by his executive on four occasions.

"She gave me repeated assurances that the meeting was coincidental ... I questioned her on that intently," he said.

"I also asked her questions about the discussion, which was a broad discussion about the media sector and the RNZ policy. Those were the assurances Carol gave me, and I trusted her word", said Mr Thompson.