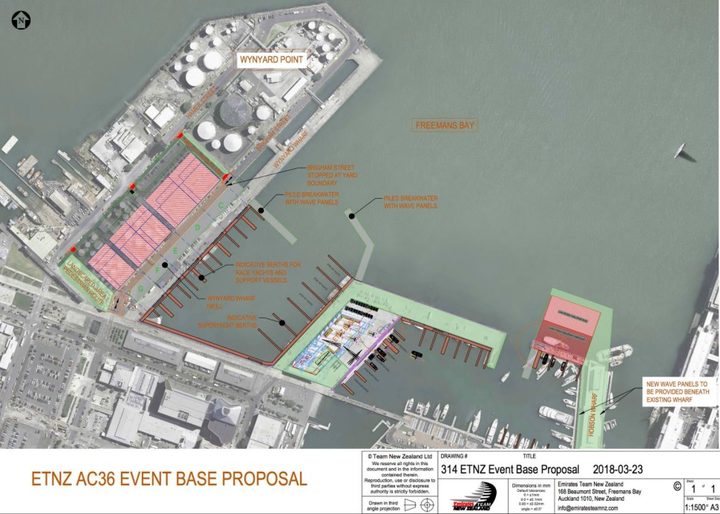 Last night, the government announced an agreement in principle with Auckland Council and Team New Zealand for the city of sails as the venue for the blue riband event.

Taxpayers will be footing $114 million of the final bill - with the council forking out almost $100 million - for a new-fangled base layout, which is cheaper, slightly smaller and more scattered than previous grand plans.

He told Morning Report he can't guarantee the nearly $100 million contributed by the council will not rise due to rising construction costs.

"I can say that the best estimates that the civil engineers and the designers have is that these figures are accurate," he said.

"I think our estimates are pretty likely to be accurate, but what I'm saying to you is that you don't know what you don't know, and there is the ongoing background of a rising construction cost which is why we have worked so hard to keep these costs to a minimum, that's what's taken the time."

Mr Goff said the $98.5 million that the council are contributing includes the estimated lost rentals from the Viaduct Events Centre and the full cost of the hosting fee for team New Zealand has been met by the government.

"We'll be trying to drive costs down further from that, we think that there is a likelihood that we can reduce some of the construction costs," he said. "There are provisions in there that we think we can avoid and we have a sharing agreement that has some of that coming back to central government."

He said the America's Cup will bring up to a billion dollars of additional revenue to the country.

"I find the cost benefit analysis a bit subjective, but I've got no doubt that the benefits will be substantial," he said.

Mr Parker said it was government who brokered the deal in cooperation with ASB and Stolthaven, driving costs down by more than $50 million.

Saving the intrusion into the harbour was one of the main points driving the negotiations, he said.

Aucklanders seem largely supportive of the 11th-hour deal to host the 2021 America's Cup on Auckland's waterfront.

One man, out for a walk with friends at the viaduct, said the event would help put Auckland on the world stage.

"It gives us a, gives us a little bit of visibility on the world stage.

"This area here was developed for the last America's Cup, so it's an incentive to invest in infrastructure. Yeah, it's a profile, and something to be proud of as a city."

One man, Eukes Bahar, remembered watching New Zealand win the Auld Mug in 1995 and the feeling of excitement across the country.

He said hosting the cup was just as exciting as New Zealand winning 23 years ago.

"I think all these events are good for us. For New Zealand, for tourism, for the activity. It's nice to host such activities. For everything, you know, for the sport, for the people, for tourism, it's very great for our economy."

Another man, Max Burgess, was happy that, when the regatta is held in three years time, he would not have to get up early to watch the action.

"I don't wake up to watch it or anything, but um, it's cool, it brings in a lot of people to the country, so yeah it's kind of cool, and as long as I don't have to wake up at three in the morning I'll watch it."

One woman was not happy about the potential crowds, however.