He said he had reconsidered what he wants to do over the next several years and decided to return to the commercial sector and to focus on being "a good dad to Tommy and Amelia".

"Many of you will know I have two young children who see some of dad but maybe not as much as they should."

It comes three weeks after the National Party's previous leader Bill English announced his own resignation.

"I got significant support, I won't say how much but it was positive."

"I think if I was in a petulant mood, I'd probably go to the backbenchers, grow a beard and just sit there fuming for a while, and that's sort of the time-honoured way you do that sort of thing in this Parliament.

"But that's not really me."

He said he absolutely had confidence in the new leader, Simon Bridges, and thought he would still be the leader in 2020.

He said Mr Bridges had been offered his choice of portfolio in the new National Party caucus.

"Simon has made a very positive proposal to me to stay and contribute as a senior member of the team on the front bench with a choice of portfolio.

He said Mr Bridges had not offered the finance portfolio, but that had not affected his decision.

"He didn't offer finance, that's alright, I'm not even sure that if I did have finance I'd necessarily stay the full two and a half years."

"This in more about my future, for me, and also if there's gonna be a change, better to be now."

"However I feel that it is time for him to get a new team around him to take National forward and win in 2020 and then govern again for the benefit of all New Zealanders.

"I have led the National Party's general election campaign five times as Campaign Chair and in four of those for John Key and Bill English, we achieved a Party Vote in excess of 44 percent, the only time it has happened under MMP."

"I have offered to assist in any way I can from outside parliament and will remain a staunch supporter of the party." 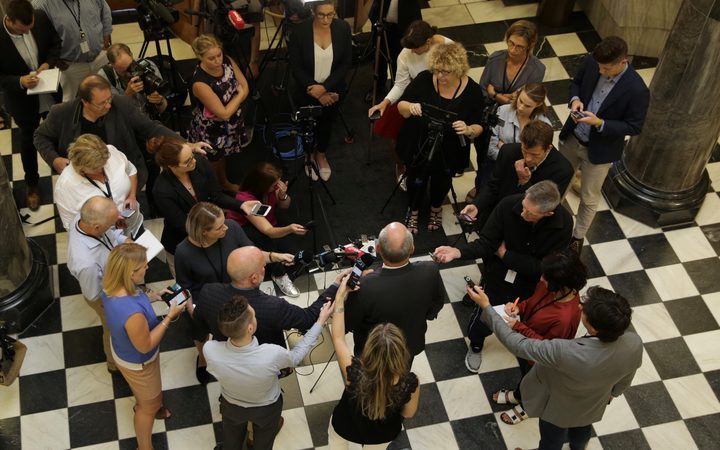 He said he was most proud of the Ultra Fast Broadband rollout, calling it "transformational", and his only regret was to do with Labour's decision to scrap changes to the tax bands.

"Particularly this issue, that is going to become more and more apparent, which is you've got people on the average wage: in three years time they're going to be on the top tax bracket."

He also said there was some work that needed to be done in education.

"Frankly I do think we need to learn to pay teachers what they're worth without going through massive convoluted formulas, because nobody else does that, it's unique to the New Zealand education system."

His next step would be back into the commercial sector, but it might be different to what he had done in the past.

"I've history in the radio business, I don't intend to go back there.

"New Zealand businesses these days are taking technology and exploiting it offshore ... I'd love to help some of those companies in some ways but it's just an open book at this moment."

Asked to sum up his Parliamentary career, Mr Joyce said, "maybe not in one word but I guess I'd like to say, 'I get on and get things done'. Cheers".

And with that, he was gone.

In a statement, Mr Bridges thanked Mr Joyce for his service during his 15 year political career.

"As a minister, Steven has played a major role in helping create a stronger New Zealand, particularly in the aftermath of the Global Financial Crisis," Mr Bridges said.

He notes Mr Joyce's successes in rolling out Ultra-Fast Broadband, his work boosting research and development as Science and Innovation minister, and his work on the Roads of National Significance programme as Transport Minister.

"Steven is a huge loss to Parliament and to the National Party and I want to thank him for his immense contribution to New Zealand, and his wife Suzanne and their children for sharing them with us. We wish him all the best."

"That meant he was given some tough tasks but he consistently rose to those challenges. And I will also continue to use him as a sounding board as the National Party looks to 2020."