Green MP Chloe Swarbrick says politicians have demonstrated how out of touch they are by voting down her medicinal marijuana bill. 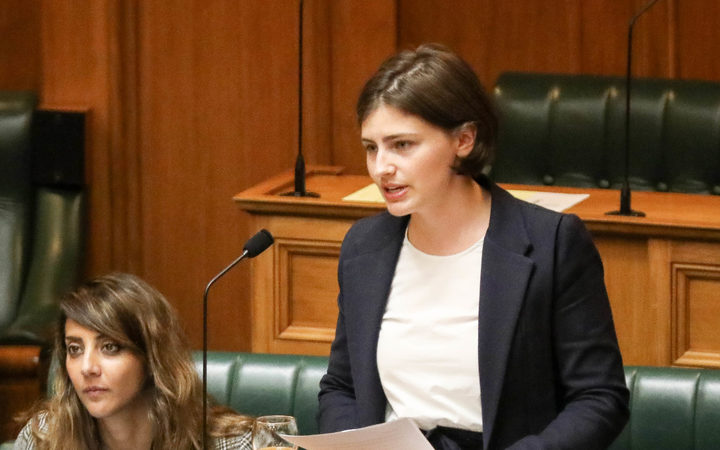 Ms Swarbrick's bill would have allowed sick New Zealanders to use and grow marijuana - or have someone grow it for them. It was heavily defeated, with 73 voting against and 47 in favour.

The bill went further than the government's proposed legislation which sets up a domestic medicinal marijuana market, making it easier for people to access, and gives terminally ill New Zealanders who use illicit marijuana a legal defence against prosecution.

During the first reading Ms Swarbrick told Parliament something had to change.

"You do not find a solution to a problem by beating it with a blunt and broken instrument.

"The law here is broken and good, kind otherwise law-abiding people are risking jail to help their neighbours and those in their community currently experiencing unnecessary suffering."

Ms Swarbrick urged National MPs who wanted to support her bill to do so - despite the official party line being to oppose it.

"I would like to invite any National Party MPs who support this to stick their neck out and to be on the right side of history tonight - it will not pass without you votes."

On Tuesday, National MP Chris Bishop said he would be backing the bill, but voted against it.

Nikki Kaye had been given dispensation to vote for it but also ended up opposing it.

"I have been in severe pain, I have had breast cancer, and the thought that I could possibly deny people who have chronic pain and debilitating illnesses access to potentially medicinal cannabis which could help them is abhorrent to me.

"However, on the other side, I have had family members deeply affected by drugs.

"I am not going to cross the floor on a bill that I know even with my votes from the National Party we don't have the numbers."

Labour's Anahila Kanongata'a-Suisuiki told Parliament she was a descendent of traditional healers and spoke of marijuana's healing powers.

"I'm talking about, concerned about, human behaviour. Human behaviour in terms of sharing your home-grown cultivation of cannabis and its healing powers.

"If I have got someone who is in pain that I love, and that it comes to a point that I can share this medicine with them, if it is about love, then I can honestly say I may not follow the rule of law."

Mrs Kanongata'a-Suisuiki then voted against the bill.

Ms Swarbrick said by voting down the bill politicians had shown they were out of touch with the public.

"I think what's been demonstrated in the House today is it is not a House of Representatives.

"As I've been saying for the past week, while out there campaigning, 78 percent of New Zealanders agree with the premise of my bill.

"It was voted down today by quite a majority - so the National Party as well have really proved themselves to be quite conservative on that."

All National and New Zealand First MPs voted against the bill.