Winston Peters has not responded to revelations that a big part of his immigration policy will be shunted aside in the Labour-led government. 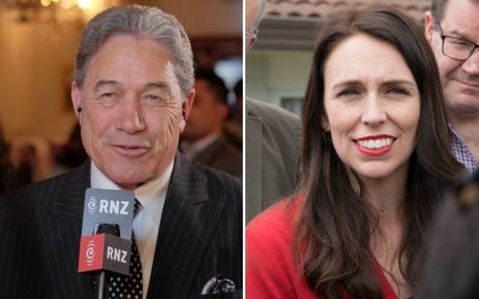 Incoming Prime Minister Jacinda Ardern has reiterated that the new government would follow Labour's policy on immigration numbers rather than New Zealand First's.

Net migration is running at around 70,000 a year, and has slowed slightly in the last few months.

In the year to September 71,000 more people arrived to live in the country than left.

That was a fall from the record annual net migration of 72,400 in the year to July. The slowdown was a combination of fewer migrants arriving and more people leaving the country.

Speaking on TV3's The Nation today, Ms Ardern reiterated that Labour's policy was still in place.

She said all three parties had common ground in the view that increased immigration was putting pressure on infrastructure.

Pressed on whether net migration would be reduced to 10,000 a year, she said Labour's policy remained unchanged.

New Zealand First leader Winston Peters has not responded to RNZ's calls seeking comment and his office said he was unavailable.

However an official pointed to several things still on the table, including making sure skilled migrants were available where they were needed, and raising the standards of export education.

Indications are that Labour and New Zealand First have agreed on a programme to cut the number of unskilled migrants and student visas.

Queenstown mayor Jim Boult said making it harder for lower-skilled migrants to enter New Zealand would be disastrous for his town.

Mr Boult said tourism and hospitality businesses relied on this group, and immigration settings should not be changed.

He said the high cost of rentals in Queenstown made it extremely difficult for firms to attract local workers.

Association for Migration and Investment chairperson June Ranson said the incoming government had no mandate to cut immigration, because Labour and New Zealand First have a minority of the votes cast in last month's election.

She challenged the Green Party, which does not support a significant cut, to stand up for its principles.

"The Green Party has categorically made the statement that they did not want to see numbers reduced," she said.

"I would very much like to know what they are going to do to come to some kind of agreement on this, because it goes against everything they have been saying."

Greens leader James Shaw said he was not spelling out what line he would take if a vote on immigration numbers came up in Parliament.

"I think we would have to cross that bridge when we came to it.

"But generally immigration numbers are not set in Parliament so it is somewhat academic."

Mr Shaw said the real debate about immigration was not raw numbers but the quality of migration and the protection of migrants from being exploited.