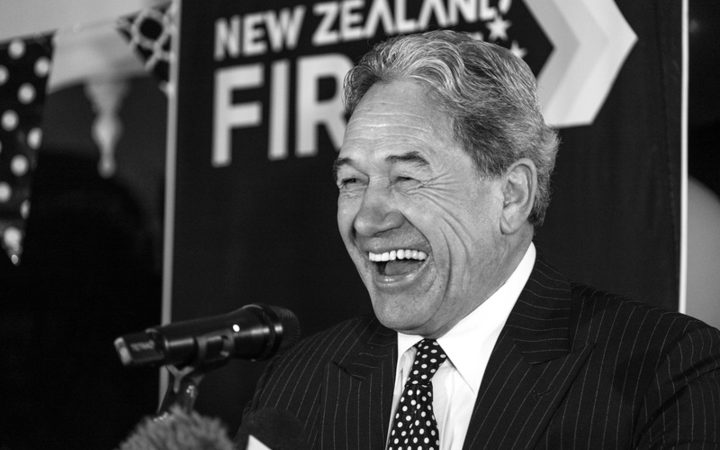 If there's been a perennial winner from New Zealand's switch to MMP 21 years ago, it's Mr Peters and New Zealand First - but his political career stretches back nearly another two decades, to his election as a National MP in 1978.

It's difficult to imagine a pre-politics Winston Peters, but he worked as both a teacher and a lawyer in his early career.

He told RNZ earlier this year that he got into politics while he was acting in a land case in Northland and realised he could protect the Māori owners' rights "a darn sight faster" if he was in Parliament.

Since then he's been part of three governments - twice in coalition - and is poised to be a crucial figure in a fourth.

Winston Peters' political career has been combative from the start. He ran for the seat of Hunua in 1978, but lost out to the Labour candidate. Never one to just give up, he took an electoral petition to the High Court that disallowed hundreds of votes - handing him just enough of a majority to claim the seat.

His first time round in government was short-lived - he lost the seat in 1981 and spent three years out of Parliament before being elected as the MP for Tauranga - a seat he went on to hold for 21 years and with which he became synonymous.

Over the years Mr Peters has taken clear delight in the theatre of Parliament, occasionally using it to expose what he deems to be scandals. In 1986, while in opposition, he exposed an attempt by the Department of Māori Affairs to try and obtain loans from overseas.

That was a mere curtain-raiser to the Winebox Affair, which prompted an inquiry into alleged corruption at IRD and the Serious Fraud Office. The inquiry - which eventually found no evidence of wrongdoing - acquired its name from the winebox containing documents at the centre of Mr Peters' claims, that he carted into Parliament in 1994. 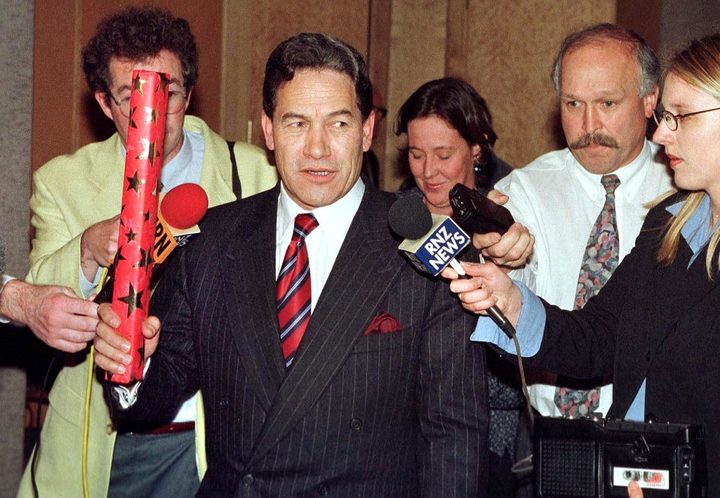 Winston Peters (centre) talking to the media after he was sacked as deputy prime minister by then Prime Minister Jenny Shipley in August 1996. Photo: AFP

Not content with needling his political opposition, Mr Peters has had volatile relationships with coalition partners and even his own party at times. His frequent disagreements with the National Party while he was a National minister led to his first sacking from Cabinet, by then-Prime Minister Jim Bolger.

He made his way back to the Cabinet table as deputy Prime Minister in 1996, when National formed the first coalition government with the newly-formed New Zealand First. Again, it didn't last long - Jenny Shipley was the next Prime Minister to fire Mr Peters, as the coalition agreement crumbled.

Whether he was fired a third time - this time, by Helen Clark in 2008 - is subject to debate. He claims he resigned, brandishing a letter confirming Miss Clark's receipt of that resignation during a heated interview with RNZ's Guyon Espiner during this year's election campaign.

Winston and the media

During a stand-up with reporters the day after the 2017 election, he jokingly threatened to throw one of them into the sea.

Mr Peters is no stranger to his own controversies. He became embroiled in - and later cleared by - what was known as the Scampi Inquiry, which investigated alleged corruption in the fishing industry, because of his alleged involvement with Simunovich Fisheries.

He was also censured by Parliament and investigated by the Serious Fraud Office over various sources of funding for New Zealand First. One of these was a $100,000 gift from philanthropist Owen Glenn, to fund Mr Peters' legal costs - which should have been declared under Parliament's rules.

The Owen Glenn donation became the subject of an infamous press conference, when instead of responding verbally to reporters' questions, Mr Peters held up a 'NO' sign. The sign was later sold at auction for more than $10,000.