Winston Peters has rejected an assurance from Prime Minister Bill English, who said a leak about the New Zealand First leader's superannuation overpayment did not come from National Party ministers. 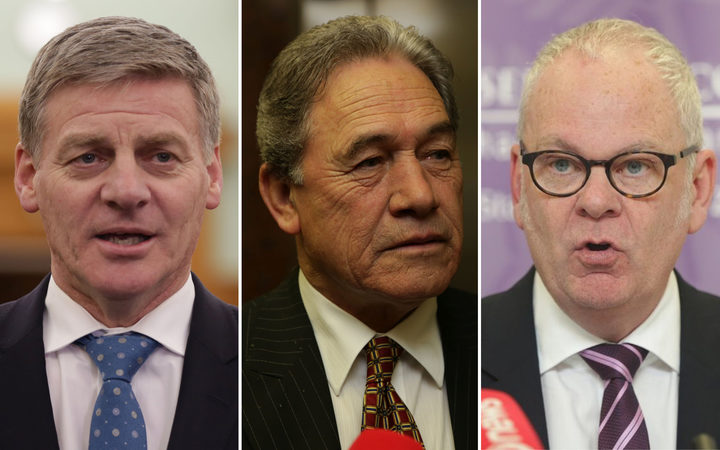 Two ministers and the chief of staff in the prime minister's office were told about the overpayment, which became public at the weekend.

See the sequence of events in our timeline.

The Ministry of Social Development and Inland Revenue are looking into whether the information emerged as the result of an internal leak.

Mr Peters confirmed on Sunday, following media queries, that his fortnightly pension had been overpaid for several years, and said that when he was notified last month he repaid it in 24 hours.

Mr English said ministers should not have been told about the overpayment, but the leak did not come from his party.

Mr Peters said he did not believe Mr English and National campaign chair Steven Joyce had not been briefed.

"The prime minister did know and he was briefed by [chief of staff Wayne] Eagleson and Mr Joyce, that's the first fact he needs to admit."

There was no reason why ministers should have been briefed, Mr Peters said.

"It was a private matter, it was being looked into by the Ministry of Social Development, I had a long conversation with them, they told me they were totally satisfied with it ... and yet this was going on behind closed doors."

He said Mr English's assurances did not remedy what he believed to be "seriously illegal" behaviour.

"And the prime minister should understand the ethics of this matter - clearly he doesn't."

Mr English said Ministerial Services were investigating how the information was handled within the relevant offices.

But Mr Peters said he was not satisfied.

"Well they can all cover their bum as much as they like, but frankly it's rotten, it's bad and we're not going to have an in-house inquiry sorting out what should never have happened in the first place by looking into their own mis-actions."

And Mr Peters said he also did not accept the assertion from the State Services Commission that ministers were only told once the matter had been resolved.

"They knew already - that's what's clear from the chronology now."

Earlier, Mr English said he had no tolerance for leaks of this nature and had been been personally assured by the ministers and his chief of staff they were not the source of the leak.

"I believe that the leak did not come from within the Beehive or the National Party," he said in a statement.

"On this occasion, however, given the personal and confidential nature of the information, it would have been better for the ministers not to have been advised."

Social Development Minister Anne Tolley was briefed by the Ministry of Social Development chief executive under the 'no surprises' policy on 31 July, and again two weeks later after officials had met with Mr Peters. Mrs Tolley informed Mr Eagleson, who did not advise the prime minister or anyone else in the office, a spokesperson said.

Mr Peters said he was the victim of character assassination and would take all steps necessary to find out who was responsible.

"It's clear now that there were people who knew things that I didn't even know about my case.

"An innocent mistake was made and they've done their best to character assassinate me and I think that's disgusting."

Mr Peters said it was a "disgrace" that so many government ministers, as well as the State Services Commission, were briefed.

"The people of this country have got to be really worried now when that can happen with private information ... it's important that people have privacy so they can have confidence in the system."

State Services Commissioner Peter Hughes said ministers were briefed about the issue only after all decisions had been made, and the briefings they received contained very limited details.

They were given with the expectation the information would be held in confidence.

Mr Hughes said that under the 'no surprises' convention, ministers had a right to be aware of significant issues within their portfolios but they must not become involved in operational matters within their departments.

He said Ministry of Social Development chief executive Brendan Boyle had discussed the issue with him, and they sought advice from the Solicitor-General on the best way to handle the matter, to ensure decisions were made independently, while also fulfilling the requirement that ministers were not surprised.

"My advice to Mr Boyle was that MSD should deal with Mr Peters' case in line with the agency's standard policies and procedures, in exactly the same way as would happen for any other New Zealander. I am assured that is what happened," Mr Hughes said.