Day four of the election campaign and the National Party is facing questions about its campaign slogan making an appearance at yesterday's pre-election fiscal update at Treasury. 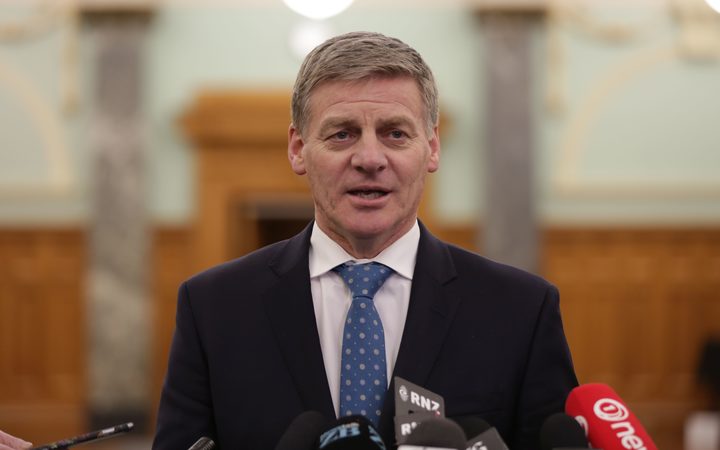 Bill English was asked about the use of the official National Party election campaign slogan during a pre-election fiscal update at Treasury. Photo: RNZ / Rebekah Parsons-King

The party's leader, Bill English, said the State Services Commission (SSC) would investigate whether it was appropriate to use a party slogan for government business.

State Services Commission rules require government departments to stay clear of party politics in the run up to the election.

Mr English said the pre-election update was a follow up to the May budget, which also featured the slogan.

"Delivering for New Zealanders was a tagline of the 2017 Budget, so it's right through the Budget material which was certainly a government announcement.

"The PREFU [Pre-Election Economic and Fiscal Update] is essentially a budget process and the Treasury run it, and it looks like the Budget material, so the SSC can have a look at it, quite happy to take their advice."

The States Services Commission said in a statement that it had been asked to comment on the slide show briefing at Treasury.

"Following our standard process SSC is engaging with the Treasury to better understand what happened in this case," said the statement.

The Labour Party said it was the third time National had failed to observe the rules.

According to Labour's campaign chairperson, Phil Twyford, National launched their transport policy on an Auckland Transport rail platform without permission.

They also announced government policy on the rebuild of Dunedin Hospital as a National Party election campaign announcement.

Mr Twyford said these "hiccups" were "getting to be a bit of a habit".

"I would have thought they would have been very familiar with the rules."

He was also asked about what information he would give to Labour about a request to send two more non-combat military personnel to Afghanistan.

Mr English said Cabinet had already made the decision, and he was quite happy to share details with Labour's leader.

"As requested we'll make the information available. But I can assure them and everyone else that it involves non-combat."