Technological advancements in the last six years means that an unmanned re-entry to the Pike River mine is possible, Prime Minister Bill English says. 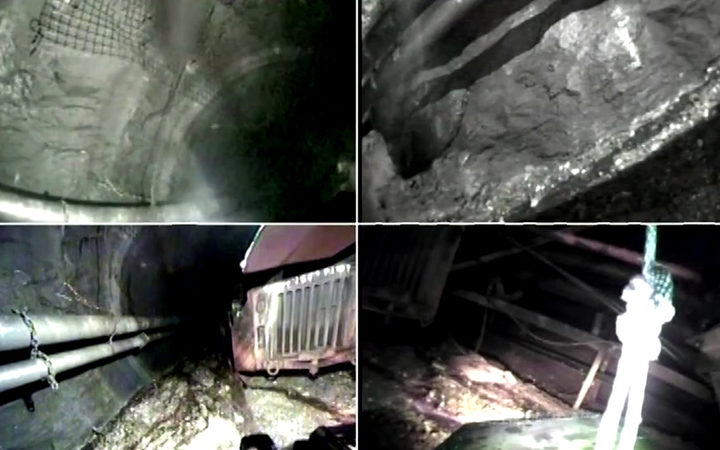 The footage shows a robot and two mine safety workers inside the Pike River Mine, about three months after the deadly 2010 disaster. Photo: Supplied

Mr English said the government is committed to exploring the possibility of an unmanned re-entry to the Pike River mine.

"We all recognise the technology has improved significantly in the last six years so there's an opportunity to get a better look than you would get from the cameras coming down through the shaft or from the robots - I mean even that technology's improved a lot," he said.

Mr English said the government would provide the families with as much information as possible without an "unsafe" entry and risking the lives of more people.

"You either come out safely, or you come out dead".

But he is refusing to engage in any talk about post election deals, including over re-entry to the Pike River mine.

NZ First leader Winston Peters has reiterated his statement a manned re-entry into the mine would be a bottom line if National needs his party's support to form a government after the September election.

"Well, we're not doing coalition negotiations five months out from an election, we've go to deal with the concerns of the families right now," Mr English said.

The police had told him all the video will again be made available to the families by the end of the week, he said.

"It is important that all the families have the opportunity to sit down, see the whole lot, decide if there's anything there they think is relevant."

Families insist they have never seen the footage

Families of some of the men killed in the Pike River disaster insist they've never seen newly-leaked video footage from a robot inside the mine.

The footage - initially released by Newshub and also obtained by RNZ - was taken about three months after the November 2010 explosions.

Mr English, has rejected claims of a cover-up, saying the families had been shown parts of the footage six years ago.

He said all of the video was then passed on to the Pike River Royal Commission.

But a spokesperson for the families, Bernie Monk, said none of them or their lawyers ever saw that section of the tape.

"I've been in contact with all the other lawyers, and I've got Colin, my brother-in-law who is one of the lawyers, with me at the moment, and that is not true, we did not see this...

"I am saying that to the country."

Mr Monk said that part of the video proved the mine had been safe to enter.

The lawyer who acted for the Pike River families during the Royal Commission said the newly-leaked video footage would have been important for the commission and families to see six years ago.

Richard Raymond told Morning Report he had not seen the footage and he has spoken to others who are confident it was not shown to the families.

He said all robotic video footage was offered at the time to be shown to the families by the police, but the families were advised that the footage did not show anything new that had not already been shown in selected extracts.

"On that basis it wasn't viewed because they trusted the judgement of others that it didn't show anything significant."

He said the families were now even more wary because a number of other pieces of evidence were also not disclosed in 2011.

"With this relevant extract popping up six years later, it makes the families very wary, very cautious, and obviously sceptical about the quality and extent of what has been disclosed previously."

Mr Raymond said the experts should have had the opportunity to consider the information in the videos in 2011.

He said while it is uncertain where the footage was taken from, it would have been important for the commission to see.

"The integrity of the tunnel, at 1.9kms is an electrical substation, a lot of equipment, bits of machinery were in the drift, which of course the commission would have been interested in seeing. So any good footage which helped with that would have been of assistance."

Sonya Rockhouse's son Benjamin died in the explosions and another son, Daniel, was one of just two survivors.

She told Morning Report the footage was "significant" and it was not something they would forget seeing.

"What irks me the most is that that footage had to be leaked to us. This is important stuff that we should have seen at the time.

"Who knows what difference it might have made, I'm not sure. But for us, it clearly shows the damage that we were told [was there], simply isn't there."

She said police needed to give the familes all the video footage they have.

Journalist Rebecca Macfie wrote the definitive account of the disaster, Tragedy at Pike River Mine.

She said the key issue highlighted by the video was the lack of transparency by the police. Two key pieces of evidence were leaked to the families and the police have not been open about their process, she said.

"I think we're at risk of getting bogged down in the detail of what this particilar video shows. It's the patterns of disclosure... and the big broader context in which the families are left to interpret everything that happens."

She said there was no excuse for all of the footage not being handed over to the families.