A raid involving New Zealand SAS soldiers in Afghanistan could not have taken place in Tirgiran Village as the New Zealand Defence Force (NZDF) claimed, because there is no such village, say lawyers.

In response to allegations, in the new book Hit & Run, that an SAS operation resulted in civilian deaths, the Defence Force questioned the claims, saying the authors got the names of the targeted villages wrong.

It produced a map asserting the 2010 raid actually took place in a village called Tirgiran. 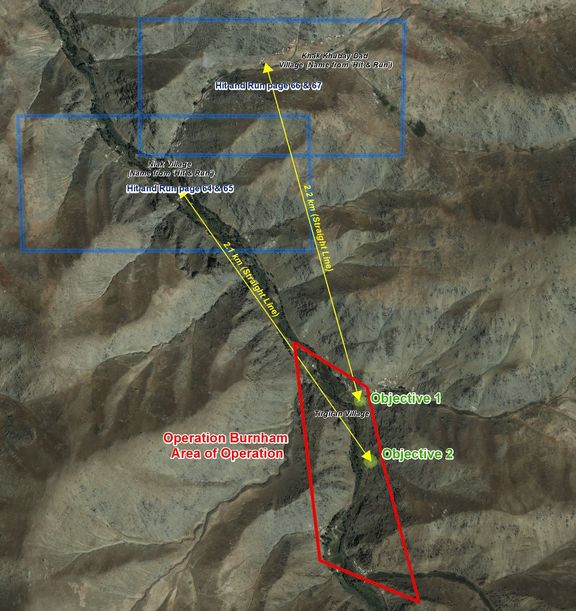 The Defence Force issued this graphic of what it calls the alleged versus the actual operation area. Photo: Supplied

But New Zealand lawyers acting for villagers say information from locals shows the two villages named in the book, Naik and Khak Khuday Dad, were the areas targeted in the raid, as shown by the Defence Force map.

In a letter to the Prime Minister, lawyer Richard McLeod said Tirgiran was the name of the valley area, not a village.

Mr McLeod said they had been told there were many settlements or villages in the Tirgiran Valley, including their clients' villages.

"It is plainly wrong to conflate an area into a village as the NZDF has done in this case."

In the letter, Mr McLeod said it was unclear "whether the creation of this flawed document has been the result of misunderstanding, error or otherwise".

However, he said the information was "plainly incorrect and unreliable".

"The flawed NZDF map and its derived conclusions therefore reinforce our view that it is untenable for the NZDF to assert that Operation Burnham was a separate operation on the night of 22 August 2010," said Mr McLeod.

The lawyers acting for the villagers have asked the Prime Minister to hold an independent inquiry into the mission.

However, Prime Minister Bill English said there was never any confusion from the Defence Force about the location of the raids.

Hit & Run authors Nicky Hager and Jon Stephenson also released a statement this afternoon, saying the Defence Force claims they had the wrong village were "not true".

"The locals know the names of their own villages and they are called Naik and Khak Khuday Dad. The raid occurred there."

They admitted they did get the exact location of the SAS raid wrong in their book.

"We have checked the NZDF maps shown at the press conference and it appears the location of the raid and the villages is indeed slightly different to what our local sources told us.

"But the villages at that location are definitely called Naik and Khak Khuday Dad, and all the rest of the story in the book is unchanged.

"Likewise the photos in the book of the villages attacked in the raid are correct, as are the photos of the victims and destroyed houses."

They rejected the Defence Force's assertion that a geographical error meant the substance of the whole book was wrong.

"The Defence Force leapt on this and tried to sow doubt about the rest of the book.

"Keating said the 'central premise' of the book was incorrect; that there were 'major inaccuracies - the main one being the location'.

"But the location is a minor detail, difficult to establish in mountains with no roads or detailed maps (there are no known maps of the valley that include the locations and names of the villages along it)."

The authors stood by other details in the book including that it was a New Zealand-led operation, and the fatalities and destruction of property that occurred during the raid.

The Defence Force has not yet responded to a request for comment.

Mr English said there was never any confusion, from the point of the view of the Defence Force, about the location of the raids.

He said he did not accept that the latest information showed the raid had actually happened as detailed in the book, even if it was 2km away.

"The book lays out a set of events that occurred in a different place, the Chief of Defence (CDF) has presented the facts of the operation, it's a different village than the other area and so that does indicate that there are not strong grounds for the allegations of war crimes."

And he said no evidence he had seen so far about the raid convinced him an inquiry was necessary.

"There hasn't been any credible evidence presented that there were civilian casualties ... but the CDF has to review any evidence that may come forward, so if the letter contains something new, I'm sure it will be considered."