Investigative journalist Jon Stephenson expects an inquiry will be announced, today or on Tuesday, into the raids involving SAS soldiers detailed in his book Hit and Run, he says. 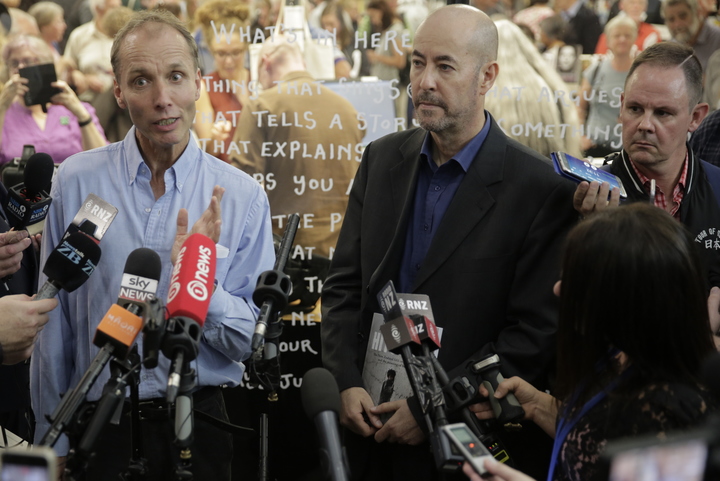 Jon Stephenson, right, and Nicky Hager at the release of the book. Photo: RNZ / Hans Weston

Stephenson told RNZ's Sunday Morning programme he was fairly confident the inquiry would be announced because the government was under increasing pressure and there was no alternative.

He said he could not control the terms on any inquiry but believed it would be useful to focus on an Afghan man who was allegedly beaten by an SAS soldier then taken to an organisation in Kabul known to torture detainees.

He also said he had evidence there were other raids in which civilians were killed.

Prime Minister Bill English is expected to meet the Defence Minister Gerry Brownlee and the Chief of Defence Tim Keating some time today.

The book, which Stephenson co-authored with Nicky Hager, describes two raids on Afghan villages in which six civilians died and 15 were wounded. At the time, it was reported that nine Taliban fighters were killed.

It concludes that the NZSAS soldiers, alongside US and Afghan troops, burned and blew up about a dozen houses then did not help the wounded. It also claims the raids were in retaliation for the death of NZ soldier Lieutenant Tim O'Donnell.

Since the book's release Wayne Mapp, who was defence minister at the time of the raids, has said he accepted the reports of civilian casualties but that "people thought they were actually being attacked by insurgents" in the raids.

The book alleged US helicopters "rained down cannon fire and rockets, destroying the two houses, injuring two of the mothers and five of their children and killing a small sixth child as she was held in her mother's arms".

The New Zealand Defence Force (NZDF) has rejected the book's conclusions, saying it stood by an investigation carried out by Afghan and International Security Assistance Force (ISAF) officials.

The Labour, Green, Māori and New Zealand First and United Future parties have called for an inquiry.

RSA president BJ Clark came out in support of an inquiry yesterday, saying he was confident in the capability of the defence force, and an inquiry would be valuable to clarify the facts about the raids.