Germany will press the European Union to work towards a quick trade accord with New Zealand, Chancellor Angela Merkel says. 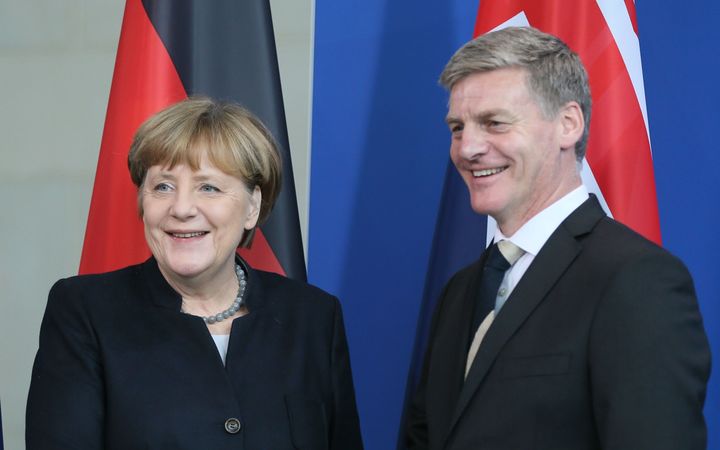 The German leader was speaking in Berlin after meeting Prime Minister Bill English.

"In particular I, and the government, have repeatedly pushed for negotiating a free trade agreement with New Zealand," she said.

"This is the assumption in Brussels, but Germany will apply pressure in the right direction."

Mrs Merkel said there were no plans to link such an accord with New Zealand's willingness to take in more refugees, but she welcomed this country's plans to provide more agriculture-based development aid to African countries.

Mr English said the government aimed to begin talks on a free trade deal with the EU as soon as possible.

"That process is under way. There's a strong commitment to it - there's a clear path and commitment to getting through it as quickly as possible."

He reiterated New Zealand would seek a "high-quality" free-trade deal with Britain as soon as possible after it left the EU.

"We would negotiate an agreement with Britain when it's not in the EU and it's ready to negotiate. We wouldn't see a role to get ahead of that process."

Britain cannot sign its own trade deals with third countries while it remains an EU member, but its Prime Minister, Teresa May, has said it is keen to start preparatory talks so agreements can be reached quickly after it leaves.

Mr English said it would become clear in coming weeks what actions the administration of incoming US President Donald Trump took regarding the Trans Pacific Partnership (TPP) free trade agreement.

"If there is a change in the American policy and they decide not to sign up to it, then we'd look for other ways of continuing that engagement," English said.

Mr Trump, who has said free trade deals have killed many jobs in the United States, said in November he would withdraw the United States from the TPP. Mr English said New Zealand was keen to see continuing US engagement in Asia.